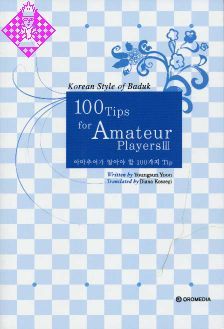 The 3rd volume of the 100 Tips for Amateur Players is finally finished!

This volume deals with capturing races, endgame issues, and other mistakes that are often made by amateur players. Capturing races and the endgame are the most complicated parts for Europeans; consequently, mistakes are repeated again and again in actual games.

The first chapter is divided into two parts; one section about measuring eye­space, followed by 10 strategy sections. The second chapter is composed of 10 shapes which appear often in the endgame of actual games.

In the third chapter, I compiled typical amateur mistakes that I collected while traveling and visiting European Baduk tournaments. Of course, there are also many mistakes included that were made by my students. I hope this book will help everyone to increase their strength, and decrease their mistakes.

It's my 4th year in Europe, and I've settled down well thanks to the help of my many Baduk friends. From now on, I would like to put my effort and concentration into the kids and younger players. As there are only a small numbers of kids and youth players who know Baduk, I believe that the most urgent thing is to spread the knowledge of this game. I hope that you can provide me with many ideas and suggestions by mail.

Finally, for completing this book, I would like to thank the members of Oromedia and the European friends who gave me advice and helped me research material for my readers.

Endgame 1 (Hane at the first line)