The store will not work correctly in the case when cookies are disabled.
Artikelnummer
RLOKNA222OTA1E4
Autor
Rainer KnaakKarsten Müller 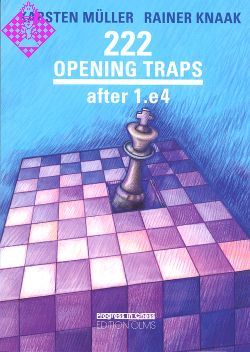 Every chess player has gone through the experience of a game com­ing to an end before it ever really started. The reason is often one of the ubiquitous opening traps, which to the victim look quite 'normal' moves - a piece is developed, something is captured, or a threat is set up and parried. The reply, for the most part an unusual one and there­fore totally unexpected, then almost inevitably leads to a rapid win for the 'trapper'. The two internationally recognised grandmaster authors - Rainer Knaak is considered an expert on the openings, and Karsten Müller on the endgame - therefore propose two main objectives:

This first volume contains all the important openings after 1.e4, such as the Italian, French, Spanish, Sicilian etc., as well as introductory texts with their typical motifs, with which one should be familiar. In this way, as a welcome side effect, the reader is guaranteed to improve his com­binative skill.

123 8.1 Typical motifs in the Giuoco Piano and the Two Knights Defence

127 8.2 Traps in the Giuoco Piano and Two Knights Defence

REVIEW OF THE GERMAN VERSION

In chess there is nothing more exciting for a chess player to go through a game where one of the players has fallen to one or other mean openings trap.

Graham Burgess once wrote in his famous book "The quickest chess victories of all time", Cadogan 1998: 'Experts agree that a major factor in successful chess playing is the ability to recognize patterns. This not only helps the analytical process, but prompts ideas to be considered that might not otherwise enter a player's mind.On the other side of the coin, many blunders, rather than being random 'hallucinations' or 'blind spots' can be explained by the relevant pattern not being recognized.'

Interesting enough John Nunn wrote in his work: "101 Brilliant Chess Miniatures" that there is no general accepted definition of a miniature game.

So different authors have different limits, but GM Karsten Müller, one of the best endgame experts of all time, and his companion the openings expert and ChessBase specialist GM Rainer Knaak provide the reader in this latest Olms book with a fascinating collection of 222 opening traps.

All divided into the e4 openings lines and running from the Nimzowitsch defence till the Spanish opening.

Every possible line is covered with a smashing game, for example the correspondence game between Ruggeri Laderchi and Rosso, corr, 1999.

This game with the Latvian Gambit did impress when the white player once showed it to me so I am pleased that this twelve move made it into this lovely printed Olms book.

Throughout the book you shall find more correspondence games even that the games are played over a longer duration the typical mistakes stay, even that the player can consult books and fast computers.

The reader is in good hands of the authors Müller & Knaak because they explain with great pleasure the openings mistakes from others.

And did you know that the Tarrasch trap is related to the game Tarrasch,Siegbert - Marco,Georg DSB-07.Kongress Dresden, 22.07.1892

Included in this book is an excellent index of names from the players, opening index and a two page bibliography.