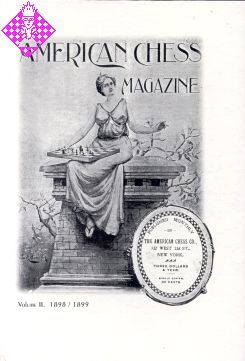 Three Volumes Magazine (Vol.I: 1897/98, Vol.II: 1898/99, Vol.III: 1899) which British Chess Magazine called at the time the best value for money ever seen. The prescient reviewer compared it to Brentano's Chess Monthly, another short-lived magazine of the time. Brooklyn Daily Eagle wrote one hundred years ago: "The American Chess Magazine, which made its debut last Saturday, reflects credit upon its compilers."

American Chess Magazine which started from June 1897 only lasted into 1899 before coming to an end. It certainly gave value for money, mixing much prose on club life and personalities with annotated games, problems, books reviews and many other items.