The store will not work correctly in the case when cookies are disabled.
Artikelnummer
LZCITACM18
Autor
Josip Asik 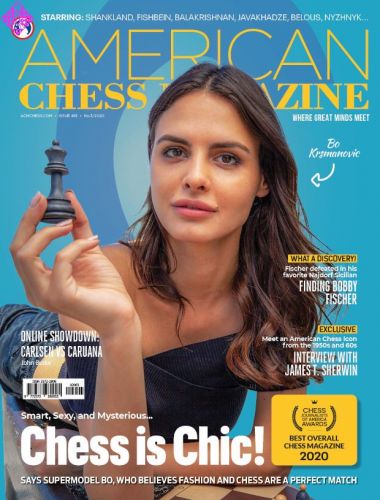 The cover of American Chess Magazine #18 features a supermodel and avid chess player Bo Krsmanovic, who believes that fashion and chess are a perfect match!

Here at ACM we consider online play to be more of a casual than a serious chess zone - a substitute that will never really be a truly satisfactory replacement for what we all cherish the most: face-to-face over-the-board play. Nevertheless in this issue we couldn’t resist publishing an article by GM John Burke, featuring games between Carlsen and Caruana, played in a “corona format”. This was particularly appropriate since no one knows how soon we will have the opportunity to witness another OTB “clash of titans.”

In mid-August we received some great news from the Association of Chess Journalists of America (CJA). In the final count of votes for 2020, American Chess Magazine won eight category awards and three honorable mentions, which once again included the distinction of being named “Best Overall Magazine”! Inside you can read more about the respective individual achievements, but we would especially like to thank the CJA for recognizing the quality of writing by John Burke, who has authored a series of splendidly crafted reports on topical events over the years. And it was for two such articles that John received the main award as well as an honorable mention in the “Best Junior Chess Print Article” category.

It goes without saying that we greatly appreciate and value the enthusiastic efforts of all our contributors, such as another CJA Awards winner - endgame specialist and experienced grandmaster, Alex Fishbein. Indeed, in the present issue, Alex shows no sign of resting on his laurels and this time introduces our readers to the legacy of “the father of endgame composition” Alexey Troitsky.

For this issue we would also particularly like to draw the attention of our younger readership to an exclusive interview with an American chess icon from the 1950s and 60s, IM James T. Sherwin. You may not know much about him. You may not have even heard of him at all. Yet, now in his eighties, this leading US player from the Fischer era is still active in chess while living peacefully in the UK. And here readers will find a rich combination of his personal insights, historical highlights and practical chess experiences - together with a selection of his noteworthy games.

By including yet another article on the legendary Bobby Fischer, readers may well conclude that ACM editors are hugely biased. But in fact it is all about unearthing buried treasure: previously unpublished games and real-life stories of a remarkable “giant killer.” Chuck Hoey has taken the chess scalps of not only Bobby Fischer but also Bent Larsen and others in their heyday - and furthermore he has been a subscriber and supporter of ACM from the very first issue!

The fully packed chess content in this issue also includes exclusive contributions by authors eager to make their debut in ACM: GMs Illia Nyzhnyk, Vladimir Belous and Zurab Javakhadze. These three successful young men provide instructional material in an original and even autobiographical way. Referring to his own OTB experiences, Nyzhnyk gives valuable practical advice for aspiring players and draws the ultimate conclusion that in modern chess, every move counts! Then Belous explains the intricacies of how and when trading the famous “dragon bishop” works for Black, while Javakhadze shares a touching personal story deeply motivated by his far-too-early-departed sports hero - the basketball icon Kobe Bryant. Such inspirational articles are worthy of not only being read - but also re-read!

Just before global lockdown, another young man had an incredible run, winning two open tournaments in a row with a score of +9=1! Of course, we simply had to report on this in ACM and here Praveen Balakrishnan does full justice to his outstanding achievement with first hand game commentaries.

In his regular column, GM Jacob Aagaard challenges readers to solve a fresh selection of examples from practical play, highlighting strategical elements that will come in handy for any competitive player.

Our Consulting Editor, Pete Tamburro, was faced with an exceptionally tough challenge when deciding the winner of our ACM Games Contest presented in ACM #17. In the end he made his final decision on the basis of specific criteria - all subjective!

In addition, Pete provides readers with practical opening analysis which follows a modern approach to playing the 4.Qxd4 Anti-Sicilian as adopted by the most successful US junior player - GM Jeffery Xiong.

This time our unsung hero is 9-year-old Daniel Kastioukevitch who won the New York Championship with a Fisheresque 6-0 result. However, perhaps even more pertinent is the fact that by playing chess Daniel has overcome various life challenges resulting from his ADHD.

Our regular contributor Jon Edwards shares his personal story on the necessity of using all available software resources while competing in the World Correspondence Chess Championship.

From times gone by, our editors have chosen to present an atmospheric dramatic sketch from 1897 by Walter Pulitzer.

Then, as usual, FM Carsten Hansen reviews ten recently published books that have caught his eye.