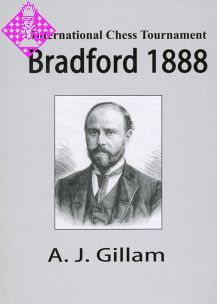 The British Chess Association tournament at Bradford in August 1888 was the first major chess event held in England outside London.

The entrants included many of the finest players of the time including Blackburne, Mackenzie, Mason, Gunsberg, Burn, Bird, von Bardeleben, Weiss and Taubenhaus plus nine other British players, from the established as well as the new generation.

The result was a great success for Gunsberg and added weight to his claim to a world championship match against Steinitz, which was played two years later.

Two books of selected games appeared immediately after the tournament, but this is the first attempt to collect all of the existing games.