A Tribute to Bobby Fischer 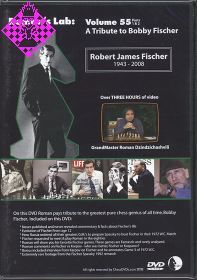 On this DVD Roman pays tribute to the greatest pure chess genius of all time, Bobby Fischer. Included on this DVD:

The first section features an overview of Fischer's life and achievements, with a remarkable collection of archive footage played out silently as Roman speaks. There are filmed snippets from all parts of his life, from his very young days all the way through his two big matches with Spassky to his final arrival in Iceland. Some of the footage was new to me; it's all very watchable, albeit emotionaly bittersweet.

Roman very sensibly steers well away from the major controversies that were one of Fischer's great trademarks and concentrates instead on the greatness of his chess. Naturally, this doesn't lead to a fully balanced picture of the 11th World Champion's life but this DVD takes the ethos of celebrating his extraordinary achievements rather than analysing the more confusing and unsavoury aspects of his personal life.

There are plenty of new anecdotes alongside the broad-brush stroke biography. Roman reveals that following Fischer's (in)famous default of game 2 in 1972, Mikhail Tal had suggested that Spassky should consider not turning up for the third game. Force-feeding Fischer some of his own medicine would have almost certainly brought the match to a premature end and Spassky would have kept the title. However, Roman goes on to explain that Spassky was determined to play chess instead of politics and such decisions were out of his hands anyway, with the Kremlin definitely pulling the Soviet strings from a distance. Additionally, Spassky must have been very unwilling to jeopardise such a massive payday (regardless of result).

Roman tells the story of how he met up with Fischer in 1980, when they played blitz chess and analysed recent games. Showing one of his own games to Fischer, he was astounded when Bobby corrected his move-order to how it really happened. Fischer's intense level of preparation greatly impressed Roman; even though there was little chance of a return to actually playing chess it was as if he was ready to play in a top tournament at any time.

The game analysis section features several games which may be unfamiliar to most viewers. Roman admits that it was not an easy task to select which ones to show and opts for a personal selection rather than a standard trip through his best-known masterpieces.

The first chunk of bonus material is taken from a volume of the DVD series 'Karpov on Fischer' . Karpov gives his opinion of Fischer and comments on game three of the 1972 World Championship match (the famous Benoni - Fischer's first ever win against Spassky).

He recalls joining Spassky's training camp for the last 20 days before the big match, and recounts that Spassky did virtually nothing other than play tennis. A single training game between the two - a Spanish game - was decided when Karpov blundered in an excellent position. Spassky (mistakenly) concluded that he was excellent shape and saw no need for further preparation.

Part of the report on the 1992 match by Cathy Forbes from Grandmaster Video volume 8 is presented here, taking the viewer up to the start of the match. Rare footage is again utilised. This is a real treat for Fischer fans, with over three hours of material. It is one of the very best of all of the Roman's Lab series. Highly recommended. Focusing on a single player was a new departure for Roman (but hopefully we will see a lot more - especially if a similar amount of historical footage is included). The majority of his DVDs feature openings, often highlighting his own ideas and novelties.