The store will not work correctly in the case when cookies are disabled.
Artikelnummer
LXKORCIML
Autor
Viktor Kortschnoi

Chess is my Life 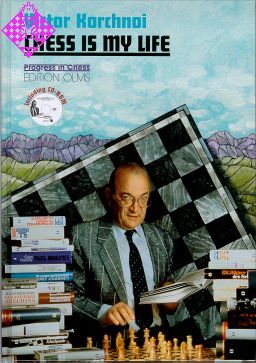 The biography will be spiced with about 15 deeply annotated games which the author judges as "key games" to his career.

It is time to update Korchnoi's biography "Chess is my Life", which was published some 20 years ago. In a series of lengthy interview sessions. Victor Korchnoi has retold his life, right from the beginning, to journalist Andre Behr (chess columnist for Tages-Anzeiger Zürich, and chess editor for Olms). This was certainly not an easy task, as the story-teller was hard to catch on his neverending tour. But the result is a completely new biography.

Korchnoi's memories of his childhood in Leningrad, his years at University, his rise to the top in the chess super-power, the USSR, and the years before and after his flight to the West are an impressive document about a restless life devoted to chess.

Witness and enjoy an outstanding chess career, told with humour and with no regrets...

Victor Korchnoi is one of the greatest figures in chess history, which he has helped to shape for the last 50 years. At the beginning of the 21 st Century, the aggressive style of this now over 70-years old is undiminished and as awe-inspiring as ever. At tournaments with numerous entrants, the naturalised Swiss Citizen leaves world-class players, young enough to be his grandchildren, far behind him.

It is high time, therefore, to update Victor Korchnoi's autobiography. The memories of his childhood during the siege of Leningrad, his time as a student at the university of his native city (now St Petersburg), his rise to the top of the major chess power, the USSR, and the years before and after his defection to the West in 1976 are also of significance as contemporary documents of a life spent in the former Soviet Union. This volume includes many photographs as well as several games, with typical Korchnoi-style comments, which have been of decisive importance in his brilliant chess career. Also included is a CD-ROM (in ChessBase format) which gives a complete record of his 4280 games.

"In all of chess history you cannot find another player with his long-lived discipline, vigour, and ferocity... Korchnoi, even in his seventh decade, is still looking for the chess truth. He still wants to play big games with big ideas. He is one of the greatest truth-seekers."

Preface The first time I met Victor Korchnoi I was twelve years old and playing against him in a simultaneous exhibition in 1975 in Leningrad. Each team of seven pioneers faced the other teams captains, and what captains! Karpov, Korchnoi, Smyslov, Polugayevsky, and you can imagine the rivalry between Karpov and Korchnoi to finish with the best score.

My Baku team faced Korchnoi in the final round and I will never forget the terrible energy Victor brought to bear against his young opponents, as if it were a world championshipmatch.

Always that mix of passion and arrogance, that's the only way he knows. While that served as an example of his zeal at the board, in 1983 he gave a lesson in character off the board. When I was disqualified from our Pasadena Candidates match by the intrigues of Soviet and FIDE officials, Korchnoi refused to write it off. He didn't believe he should move on to face Karpov again without first defeating me.

When we met in Yugoslavia to discuss the match he also shared some practical advice. He looked at my clothes and remarked, 'You can always tell a Soviet man by his shoes. Go buy some good shoes!'

Korchnoi has always been as critical of himself as of others. There have been very few players with the honesty to criticise their own moves. Among them I would name Botvinnik, Fischer, and most definitely Korchnoi.

I recall one of the games from his annotated collection, a game in which he defeated World Champion Botvinnik. He revisited the game and his old commentaries and made a quite unusual observation. When writing about his old analysis, in which he had said '...Bc6 would have given Black better chances to survive,' Korchnoi added 'typical cowardice when the annotator cannot find the win.' And in his latest analysis he found the win! Impressive honesty after you beat the World Cham­pion, and to maintain that approach 40 years later.

Korchnoi has long been one of the most controversial figures in the chess world, but everyone recognises his immense contribution. In all of chess history you cannot find another player with his long-lived discipline, vigour, and ferocity. He is truly one of a kind. Lasker and Smyslov played for a similar number of decades, but their contributions diminished as they relied more on their talent and experience. Korchnoi, even in his seventh decade, is still looking for the chess truth. He still wants to play big games with big ideas. He is one of the greatest truth-seekers. My relations with Korchnoi have had highs and Iows over the years, but our mutual passion for chess has always won out. We can do nothing but admire his steadfast commitment to our game.

Prologue The idea of this book belongs to Thomas Wälti, a Swiss Journalist. It is thought, and not without reason, that the main thing in a chess player's biography is his games. That is, his creative life, that which must not be lost, that experience which will be absorbed by humanity. And a book of my games - two even! - have been written and published. But Wälti, a long-standing, enthusiastic fan of mine, suggested that my life story was also something unusual and stirring, that deserved to be told and published as a separate book.

But who should write it? A grandmaster is not bound to be skilful with his pen. To be a writer is also a divine gift, and one that I do not possess. I think that even a Profes­sional psychologist would be unable to convince me that I am any good as a writer. The person who worked on my biography should have been a Professional, desirably one who was familiar with my life, desirably one familiar with the life of people in the Soviet Union, and desirably one who appreciates the subtleties of the Russian language.

This should probably have been a resident of Moscow or St Petersburg. But during the more than 25 years since I left that country - moreover, when I left it, I was convinced that it would be for ever! - I severed all connections with the intellectuals there.

This means that my biography should have been written by a Swiss Journalist. Prob­ably Thomas Wälti himself should have put his own idea into effect, but serious and protracted organisational difficulties arose. In the end, despite the absence of faith in my powers, despite the lack of enthusiasm, it was decided that I myself should write my biography. And in view of the loss of several years on organisational disagreements, I had to describe my life in an extremely compressed time.

Some time ago, during my first year in the West, I wrote an autobiographical book Chess is my Life, which was translated into English, German and Dutch. I looked carefully at what I had written. Much space, too much space, was devoted to descriptions of tournaments and games. Of course, a chess player cannot get by without describing games, but there are other books and there are diskettes. These include game commentaries. But commentaries look dry - in them it is not customary to talk about human relationships, about the relationships between the two players. And it is on human relation­ships that I have focussed in this book.

I have already written a book Antichess about the central event of my life - the match in Baguio. I have now critically examined it and made some additions.

The greatest difficulty is writing about my current life, about processes that are still in progress. On the other hand, this biography frequently develops into a critical review of reality. I hope that the overwhelming majority of the readers will appreciate my endeavours to keep pace with modern life.

008 Foreword by Sergey Ivanov: The Secret of Chess Longevity

Part I - My Life in the Soviet Union

019 2. Higher Studies and the Master Title

065 8. I gain Experience, both Political and Professional

097 15. First Clashes with the Soviet Machine

Part II - My Life in the West

124 3. The World Championship Match in Baguio

142 Stormy Events at the Finish

146 Immediately after the Match

149 4. The Olympiad in Buenos Aires and the Chameleon Donner

165 8. The World Championship Match in Meran

201 17. Wijk aan Zee and the Tournaments of Van Oosterom

204 18. New Rules and the FIDE Events in Las Vegas and Moscow

'Chess is my life' is an English translation from 'Mein Leben für das Schach', which we reviewed a good year ago.This latest work is perfectly translated and edited into the English language by no less than Ken Neat, even that there are some slight difference in pages. The Germans simple need more words than the English, the main tournament results in this book cover a lot of extra 2005 results. Victor Korchnoi, born 1931, has been one of the world’s leading players for nearly 50 years and can be counted as one of the greatest chess players of all time. Korchnoi is among the chess players in Switzerland unbelievable popular, nearly all players know exactly where Korschnoi lives but so far I did not meet many chess players who even could beat him in a simultaneous exhibition and the great hero of chess already passed the impressive age of 74! I have seen biography’s from Korchnoi in the Dutch and German language but not one is so open as this autobiography from Olms. Korchnoi believes that every strong player has to do something for his offspring and that was the reason for the basis of this outstanding chess biography. The reader shall find in this book many personal things and photos about Korchnoi's personal life as for example his first wife Bella and son Igor who had both such a tough time in the former Soviet Union. This book covers the whole career from Kortschnoi, but now and then he opens the door of his personal life and that makes this book such an interesting read, for example his meeting with Stalin’s daughter Swetlana Alllilujewa and his contacts with the Russian Mafia in New York. For Korchnoi chess is above all a fight where friendships are forgotten, problems are shelved, the struggle on the board takes all his passion and that makes this book so unique! Included in this book are only nine games, where seven of them are superb analysed by the great master himself, and an extra CD ROM with around 4280 latest Korchnoi games and that is 30 more than on the German CD! Conclusion: A unique autobiography!