The store will not work correctly in the case when cookies are disabled.
Artikelnummer
LXSANJRC
Autor
Miguel A. Sanchez 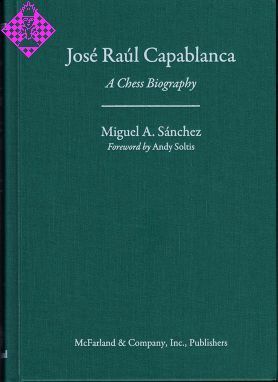 This is the most complete and thorough biography of José Raúl Capablanca, one of the greatest players in the history of chess. Beginning with his family background, birth, childhood and introduction to the game in Cuba, it examines his life and play as a young man; follows his evolution as a player and rise to prominence, first as challenger and then world champion; his loss of the title to Alekhine and his efforts to recapture the championship in the last years of his too-short life. What emerges is a portrait of a complex man with far-ranging interests and concerns, in stark contrast to his robotic reputation as “the chess machine.”

Meticulously researched, utilizing many sources available only in Capablanca’s home country, it puts truth to legend regarding a man who stood astride the chess world in of its most dynamic and dramatic eras. Numerous games and diagrams complement the text, as do a wealth of photographs.

Author Miguel A. Sanchez is a well known chess journalist and historian in Cuba, he also wrote several other books about Cuban contemporary history. He lives in Bayside, New York.

007 Havana the Eldorado of Chess

104 Champion of the Americas

275 Slipups at the Summit

539 Index of Openings ( by Traditional Name)