The store will not work correctly in the case when cookies are disabled.
Artikelnummer
LXILYNOASM
Autor
Alexander Ilyin-Genevsky

Notes of a Soviet Master 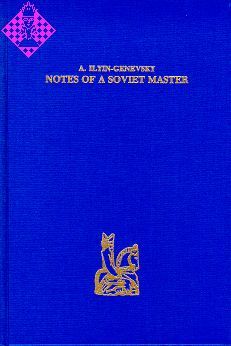 As Volume 5 In the "Caissa Limited Editions" series I have chosen Ilyin-Genevsky's little book NOTES OF A SOVIET MASTER. It is a significant and interesting book which has never appeared except in its original edition of only 10,000 copies in Russian in 1929. Today, after the passage of time and the tragedies of WWII, few copies remain, especially outside the Soviet Union.

Ilyin-Genevsky was obviously a man of strong character and ability. Soviet chess owes a great debt of gratitude to his dedication and abilities as an organizer and editor as well as his talents as a player. To further enhance the value of the book to chess players and as an additional memorial to Ilyin-Genevsky, I have added a selection of his best games in Section Two.

There is another reason too for publishing this book. In this nuclear era with its inherent risks of mass destruction beyond comprehension, It is necessary that we build as many bridges of understanding and friendship as possible between peoples of divergent political philosophies. Chess is a universal language which transcends many of the barriers which divide us. By helping to show the history of chess development in the world's foremost chess nation I hope to further such understanding.