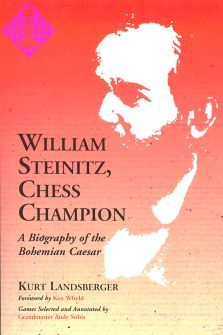 Long known as one of the greatest chess masters of the nineteenth century, William Steinitz had a rich and elevated career and life, which can now be known as well. From Steinitz’s own writings and the fruits of extensive first-time-ever research by the author, a fascinating portrayal emerges of the life and genius of a man widely known as the “Bohemian Caesar” quite apart from his chess dominance. Lengthy annotations for the 15 selected games are provided by modern grandmaster Andy Soltis, often augmented by Steinitz’s own observations. Three additional games are also included. Each game is illustrated.

About the Author Kurt Landsberger, born in Prague with the name Steinitz, is the champion’s great-grandnephew. He divides his time between Verona, New Jersey and Boca Raton, Florida. He is also the editor of The Steinitz Papers: Letters and Documents of the First World Chess Champion (2002).

XI An opinion about this book (Ken Whyld)

for he always makes the same mistakes."

465 The theory of Steinitz (David Hooper)

“Outstanding...should be in the library of every serious collector”-San Francisco Chronicle