The store will not work correctly in the case when cookies are disabled.
Artikelnummer
SXANAWCPV01
Autor
Viswanathan Anand

Enter the Mind of a 5-Time World Champion
Eigenschaften
Vergriffen 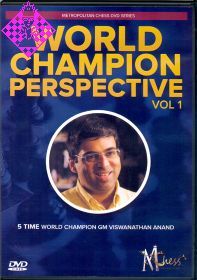 Enter the mind of a 5-time World Champion!

GM Viswanathan Anand is one of the most successful chess players of all time.

Having won the World Championship on five separate occasions, as well as numerous super-GM level tournaments, Anand has developed a deep and profound understanding of chess.

In 2012 and 2013, Anand traveled to Los Angeles to teach at the annual Metropolitan Chess Camp, sharing his unique insights with some of the top scholastic talents in the U.S.

His teachings and instruction from both camps has been edited to create standalone lectures, which will be the focal interest of the World Champion Perspective series.

The DVD is shot in the style of one-on-one instruction, with the look and feel of a personal private lesson with GM Anand.

In this first volume, Anand analyzes three high-level games that take place within the Sicilian Defense .

By focusing on thematic plans, concepts, and motifs, Anand familiarizes the viewer with the most important ideas of any opening, middlegame, or endgame.

Anand's long-lasting love for the game can also be felt as he enthusiastically presents the most beautiful variations in each game.

MATERIAL INCLUDED ON THIS DVD: