The store will not work correctly in the case when cookies are disabled.
Artikelnummer
LOWATMTCO2
Autor
John L. Watson 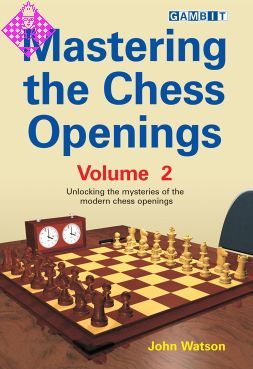 For most chess-players, opening study is sheer hard work. It is hard to know what is important and what is not, and when specific knowledge is vital, or when a more general understanding is sufficient. Tragically often, once the opening is over, a player won't know what plan to follow, or even understand why his pieces are on the squares on which they sit. John Watson seeks to help chess-players achieve a more holistic and insightful view of the openings. In his previous books on chess strategy, he explained vital concepts that had previously been the domain only of top-class players. Here he does likewise for the openings, explaining how flexible thinking and notions such as 'rule-independence' can apply to the opening too. Watson presents a wide-ranging view of the way in which top-class players really handle the opening, rather than an idealized and simplified model.

This volume, focusing on queen's pawn openings, is a book that will make chess-players think hard about how they begin their games. It also offers both entertainment and challenging study material in openings such as the Nimzo-Indian, King's Indian and the entire Queen's Gambit complex.

International Master John Watson is one of the world's most respected writers on chess. His groundbreaking four-volume work on the English firmly established his reputation in the 1980s, and he has produced a string of top-quality works since. In 1999, Secrets of Modern Chess Strategy, Watson's first book for Gambit, won the British Chess Federation Book of the Year Award and the United States Chess Federation Fred Cramer Award for Best Book. His pupils include the 1997 World Junior Champion, Tal Shaked.

This second volume of Mastering the Chess Openings investigates openings in which White plays 1 d4. As in Volume 1, which examines 1 e4, I work from the ground up, starting with the very first moves of each opening to explain its elementary properties. Someone with only a modicum of playing experience should be able to master these fundamentals and use them as a basis for under­standing the more sophisticated material that follows. For a primer on the rudimentary principles that apply to all opening play, please refer to Chapter 1 of Volume 1. The next two chapters of that volume may also be useful, since they identify the ideas and themes most often referred to in the book as a whole.

My philosophy is the same in both volumes, but a few points bear repeating. These books are not meant to cover all openings, much less all of their variations; such an undertaking would require scores of volumes. Instead, I have selected systems that I consider the most useful for the sake of explanation and instruction. In the main, these are the most 'important' openings, in that they have had a large following through the years and have a well-developed theoretical underpinning. Within these major openings I have picked a number of variations to study in some detail, based upon the belief that in-depth familiarity with several variations is better than superficial under­standing of all. In order to place this selection in context, I leave signposts to indicate the direction in which alternatives may lead.

While some of the games and analysis are recent, many classic examples are used to illustrate general points.

This is not primarily a theoretical tome: some of the opinions that I venture about the value of hotly-contested individual lines will undoubtedly prove wrong or irrelevant. Instead, my goal is to provide a solid basis for the reader to play openings successfully, emphasizing positional features and techniques that extend to variations beyond those at hand. Notice that this differs from a full ex­planation of an opening using concepts specific to that opening. We shall see that individual moves themselves express ideas, whether or not they fit into a general scheme that has previously been set forth. Accordingly, a certain level of detail is absolutely necessary to understand both the consis­tent strategies and the anomalies that can render such strategies irrelevant.

On a practical level, I have subjected readers to recitations about the niceties of move-orders; the associated issues can be confusing but bear a direct relation to real-world results. Assessments of variations can evolve very rapidly, but how one best arrives at the desired starting points tends not to change much.

In the next chapter I examine the fundamental characteristics of 1 d4 and how it differs from 1 e4. You will find further comparisons between these moves in both volumes. The study of 1 d4 by itself will suffice to improve your chess understanding by leaps and bounds, but if you truly aspire to master the game you will want to know as much as possible about the e-pawn openings as well. I sincerely hope that these volumes will help you in both respects.

ChessBase Magazine (up to no. 113); ChessBase

Informator (up to no. 96); Sahovski Informator

Ripperger, R.; How to Play the Nimzo-Indian?; ChessBase 2002

Vaisser, A.; Beating the King's Indian Defence and Benoni; Batsford 1997

Watson, J.; The Gambit Guide to the Modern Benoni; Gambit 2001

Yermolinsky, A.; The Road to Chess Improvement; Gambit 1999

012 Declining the Gambit: Other 2nd Moves

066 Move-Orders in the Queen's Gambit Declined

1144 Introduction to the Indian Defences

122Lines with ...d5 and the Botvinnik Approach

2537 Bc4 and the Classical Exchange

International chess master John Watson, the master of explanations, concentrates in this second volume of "Mastering the chess openings" on the Queens Gambit Declines lines, Slav and Semi-Slav lines, Nimzo-Indian defence, Queen’s Indian defence , Grünfeld Defence and the Modern Benoni. In big lines Watson goes for typical play above latest developments but he covers in these 319 pages an unbelievable amount of complete games and instructive explanations. For example the King’s Indian four pawn attack is well filled with around sixteen and a half pages of text and he gives to the reader more explanations than moves! The book is overloaded with instructive text but it is for example very interesting to pick out something as in the King's Indian defence where Watson sees nothing in the Gunderam attack (1.d4 Nf6 2.c4 g6 3.Nc3 Bg7 4.e4 d6 5.f4 0-0 6.Nf3 c5 7.d5 e6 8.Be2 exd5) 9.e5, named after the German gambit player Gerhart Gunderam (1904-1992) who was the inventor of this line but it is also known as Florentine Gambit and very popular under the local chess scene. But first some words from Watson: "9.e5 is still being played and has been analysed for years. In most examples it is a classic case of overextended pawns. The easiest road to some advantage is 9 ... .Ne4 10.cxd5 Nxc3 11.bxc3 Nd7 12.0-0 dxe5 13.Kh1 e4 14.Ng5 Nf6 15.Bc4 h6 16.Nh3 Bf5 Ruhrberg - Kopp,Hessen 1992" but Watson gives in the book some more possibilities but I like this one its most. Konikowski & Soszynski give in their book "The Fearsome four pawns attack" as alternative 10.Nxd5!? but Watson waves it all away with 10 ... Nc6 11.Bd3 f5 12.exf6 and 12... Nxf6 favours black. Many positions in this book get an important turn from Watson as the explanation of the Russian system in the Grünfeld defence 1.d4 Nf6 2.c4 g6 3.Nc3 d5 4.Nf3 Bg7 5.Qb3 dxc4 6.Qxc4 0-0 7.e4 altogether good for nearly three pages of his book where the notes after 7 ... Nc6 are very interesting seen the influence of computer analysis. Watson: "Most players find 7 ... Nc6 a little hard to believe at first, since it walks directly into d5 now or later." That was the conventional wisdom for some years until, armed with computer analyses, some players decided that a knight on a5 (for that is where it’s headed after d5) would be in no great danger, and that its influence over the board will be significant if black can open the c-file by means of ..c6. Such a modern view of flank knights is not so unusual. Black is saying: ”I don’t care where my pieces end up as long as I can break up your centre.”So it is clear that Watson digs deeper in this book than only on the vital concepts of modern play!Conclusion: Buy it for the highly instructive explanations from John Watson!

"John Watson seeks to help chess-players achieve a more holistic and insightful view of the openings. In his previous books on chess strategy, ... , he explained vital concepts that characterize modern Chess. Moreover, he did so in ways that have enabled these ideas to be understood by club players. Here he do this likewise for the openings, explaining not only the ideas and strategies behind specific openings, but also the interconnections of chess openings taken as a whole. Watson provides a permanent basis for playing openings of any type."