The store will not work correctly in the case when cookies are disabled.
Artikelnummer
SOLEMTSTMTCO
Autor
Damian Lemos

Secrets of Mastering the Chess Opening 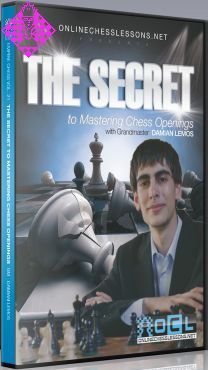 The opening is the most important phase of the game in chess because you have to come out swinging, desperately attempting to punish the slightest inaccuracy by your opponent. At any level in chess, from beginner to World Champion, the player who is able to achieve rapid pressure in the opening is going to have better chances of maintaining a long-term advantage. In this chess video/DVD Grandmaster Damian Lemos demonstrates how the beginner player should perceive the opening and plan a successful approach by aiming for strong control of the center, rapid development and early threats! This DVD is targeted at beginner chess players, guaranteed to vastly improve your understanding of the opening and how to start winning games from the very first moves!

Watch out for the mistakes!

In this chess DVD Grandmaster Damian Lemos explains the basic concepts of the opening: explaining the basic rules and guidelines for minor piece development towards the center, while also showing a few typical mistakes in this phase of the game. In the first example we have a brief review of the basics, and in the second example we dive into the game Morphy vs McDonell where white wins thanks to a rapid lead in development. In the third video we see black lose too many tempi with his queen in the early stages of the game, for which he will be punished very dearly! In the fourth video, we study a gambit where black prioritizes his development in place of material game while in chapters 5-6 we examine a few games by the former World Chess Champions Capablanca and Alekhine - all the while emphasizing their energetic and attentive styles of play from the very first moves. Lastly, we will analyze a game where white plays very ambitiously in the opening to create powerful long-term outposts to stage a deadly attack!