The store will not work correctly in the case when cookies are disabled.
Artikelnummer
SCORISAWCRATQGD
Autor
Robert Ris

Against the Queen´s Gambit Declined 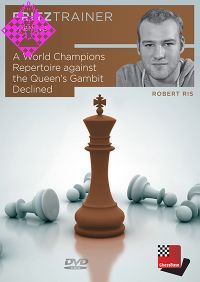 Interactive, communicative and efficient. These are the distinguishing features of the recently developed training format by ChessBase. You are transformed from a spectator into a participant! Answer every one of your trainer’s questions by entering a move. It doesn’t matter whether you score a bullseye or not: your trainer will provide you with feedback. Like that, you assimilate variations and motifs with every move!

Back in the 1950s, it was Botvinnik who popularised the Exchange Variation of the Queen’s Gambit Declined. The setup, which involves putting the knight on e2 in combination with castling kingside, was revolutionary at that time. Until then, White had either placed his knight on f3 with the idea of s tarting a minority attack on the queenside, or on e2, where it was normally associated with the intention of castling

queenside and preparing a pawn storm against the Black King. K asparov, Botvinnik’s pupil, would soon follow in his mentor’s footsteps, bringing yet further refinements to this flexible system. This DVD offers a complete repertoire for handling this solid opening, often featuring a dynamic approach to pose the opponent more practical problems. Both of the main c ontinuations 3...Nf6 and 3 ... Be7 are covered in two separate

parts and their inherent differences and possible transpositions are mentioned wherever they arise. After seriously studying the theoretical lines, the strategic ideas and tactical motifs, you will surely be able to answer the quiz questions successfully and integrate this World Champion repertoire into your own games.

Born in 1988, Robert Ris is an International Master who has represented The Netherlands in various international youth events. Nowadays his main activities in the Amsterdam area consist of teaching in schools and chess clubs as well as coaching private clients. On top of that, he is also an active online trainer with a number of students from a host of different countries. Robert has made several appearances as a live commentator for prestigious events, such as the Dutch National Championships 2011-2013 and the Tata Steel Chess Tournament in 2013 and 2014.