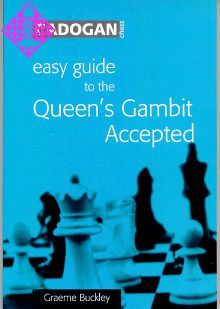 The Queen's Gambit Accepted is one of Black's most trustworthy and yet dynamic ways of facing the Queen's Pawn Opening. Black immediately accepts the invitation to open the position, leading to positions rich in positional and tactical complexity. Now, for the first time, Graeme Buckley uncovers the secrets behind the opening which has become a firm favourite amongst many of today's top players.

Graeme Buckley caused quite a stir in his first year as a professional player, securing his International Master title in a matter of months, quickly followed by his first grandmaster norm. More recently he has also been involved in some major coaching projects. In 1996 he was manager of the English youth team, who achieved the impressive double of winning both the Glorney and Faber Cups.

051 4 Classical Variation with a Quick e4