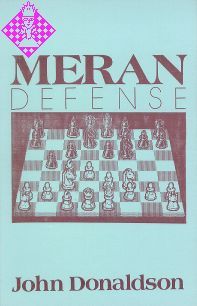 The Meran Defense, Semi-Slav, has experienced renewed vigor since Kasparov added this line to his repertoire. The line received its name from the game Griinfeld - Rubinstein, played in the strong 1924 Meran tournament. This dynamic defense deserves an up-to-date treatment and author Donaldson has provided a thoroughly researched treatise. That he is a practitioner of the line is clearly evident from the rich analysis and feel for the nuances of the variation. Current developments were reflected in the text right up to press time. This book is an invaluable resource for the student of the openings.

The subject of this book, the Meran, has been around since Grünfeld -Rubinstein, Meran 1924. Since its debut over sixty years ago it has maintained a fairly high profile, having been championed at one time or another by such greats as Botvinnik, Euwe, Larsen, Korchnoi, and Polugaevsky. Recently it has experienced a real surge in popularity, perhaps due to World Champion Kasparov's advocacy.

In this book I have attempted to provide a fairly comprehensive guide to the Meran for both White and Black. For reasons of space clearly inferior continuations for both sides are dealt with fairly brusquely. Readers wishing a more detailed treatment of these are advised to consult Harding's Q.G.D.: Semi-Slav.

Space considerations have also made comments to the text somewhat meager. Although this is an opening book and not a middlegame text, I've tried to make this book accessible to players of all ranks by carrying out the positions longer, i.e. waiting to give an evaluation until things have settled down when possible. Additionally I have cited all games which can be found in the Informant for those wishing a complete score.

Readers will note that the chapters have no names. This is not accidental. As in many openings the Meran is filled with lots of misleading nomenclature. More than once a player has stumbled into something new, completely misinterpreted things, yet lived to see his name stuck on it forever. To my mind it seems much more reasonable to mention who truly contributed to its growth. For example in the 8 Be2 Meran Capablanca is attributed with being the father. But in his hands it was primarily used as a means for an early exit from the tournament hall. I.M. Pytel of Poland who has played and written about it extensively deserves more credit in my opinion.

On a final technical note, the reader will notice that a standard move order has been used throughout the book for the first seven moves. Although this is possibly the most common route to the Meran it is hardly the only one. Other common ways of reaching the position after 7...b5 are:

For a more detailed treatment of move orders the readers is advised to consult the introduction to Harding's work.