The store will not work correctly in the case when cookies are disabled.
Artikelnummer
SXWARPTQG
Autor
Chris Ward 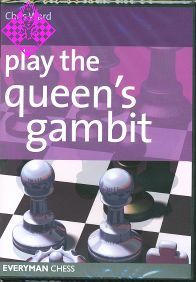 Few would disagree that the Queen's Gambit is one of the most important openings in chess. It has a long and distinguished history and has been played by virtually all the strongest Grandmasters: Garry Kasparov, Vladimir Kramnik, Anatoly Karpov, Vishy Anand - the list goes on and on! From the very beginning White develops actively, takes the initiative and strives to dominate the centre. Most agree that the Queen's Gambit is White's best chance for an opening advantage after 1 d4 d5.

Despite its many advantages, some prospective Queen's Gambit players are put by the possibility of having to learn a labyrinth of different variations. In Play the Queen's Gambit Chris Ward solves this problem by presenting the reader with a concise and workable repertoire, offering a solution against each of Black's possible defences, whether it's a critical major variation or a tricky sideline. Ward examines the tactical and strategic motifs for both players and arms the reader with enough information and self-assurance to begin playing the Queen's Gambit in his or her own games.

Software is as a ChessBase-Database (CBH) on the CD!

Viewable with ChessBase 6.0 and above, ChessBase Light (free download) and other ChessBase playing programs such as Fritz.