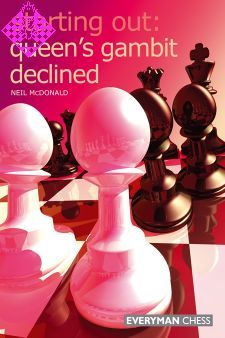 The Queen’s Gambit Declined is an opening of great historical importance and Black’s fundamental answer to 1 d4. From the very first move Black obtains a firm foothold in the centre, something that White finds extremely hard to undermine.

Indeed, Black often bases his entire strategy around this control. The soundness of the Queen’s Gambit Declined has never been in question, and its supporters at the highest level include a long list of Grandmasters headed by Kasparov, Kramnik, Karpov and Short, as well as many World Champions from the past.

This book is a further addition to Everyman’s best-selling Starting Out series, which has been acclaimed for its original approach to tackling chess openings. Neil McDonald goes back to the basics of the Queen’s Gambit Declined, introducing the key moves and ideas, and taking care to explain the reasoning behind them - something that is often neglected or taken for granted in other texts. In this user-friendly guide, the reader is helped throughout by an abundance of notes, tips and warnings highlighting the vital characteristics of the Queen’s Gambit Declined and of opening play in general. Starting Out: Queen’s Gambit Declined is a perfect guide for improving players or for those new to this opening.

English Grandmaster Neil McDonald is an experienced and successful player on the international chess circuit. He is a respected chess coach, who has trained many of England’s strongest junior players. McDonald is also a talented chess writer and has many outstanding works to his name. Earlier Everyman Chess books include Concise Chess Openings and Starting Out: The English .

The beautiful thing about playing the Queen's Gambit Declined as Black is that your opponent will have to play better than you if he wants to win. And if he plays badly, there is nothing stopping you from bagging the whole point.

But isn't that the case in any opening you might choose? Not necessarily. Let me relate an experience I have had far too often for my liking playing the King's Indian as Black. From the start, I cede Space to my opponent in return for kingside attacking chances. Already this puts pressure on me to find the most accurate continuation, perhaps even a difficult combination or a deep sacrifice. And if I don't find the precise move or idea that is needed, I will end up in trouble. Therefore, my opponent doesn't necessarily have to play better than me to win the game: if I fail to show enough energy or invention, I could end up being crushed by fairly straightforward positional moves.

Now, there are many players - notable examples being Kasparov and Fischer - who have achieved fantastic success through counterattacking in the King's Indian. They have a great ability to calculate and find hidden resources, and are armed to the teeth with opening knowledge.

But what about newcomers to chess, or players with limited time to study, or those of us not blessed with a deep calculating apparatus?

If you come into that category, then why not play the Queen's Gambit? When you push 1...d5 you are saying to the opponent: I'm not giving you any space for free; it's going to be an equal fight, and if you want to try to win you are going to have to find a lot of creative moves!

A comparison with the King's Indian reveals another good feature of the Queen's Gambit: it is very tolerant of slight positional mistakes. In the King's Indian a small error can prove very costly for Black, as the emphasis is on counterattack. Whereas in the Queen's Gambit, if Black puts a bishop on a rather passive square, or loosens his pawns more than strictly necessary, he can remedy his error with careful consolidating moves. There is no need to do or die.

It is this reputation for solidity and reliability that has attracted some of the most famous players in the history of chess to the Queen's Gambit Declined. Within these pages, you will find games by the likes of Capablanca, Alekhine, Botvinnik, Petrosian, Spassky, Fischer, Karpov, Kasparov and Kramnik. There are no games by the second World Champion, Emanuel Lasker, but as consolation we do have a chapter named in his honour; while the ghost of his great predecessor, Wilhelm Steinitz, the positional genius, pervades all the ideas in the book.

As the Queen's Gambit Declined is to a large extent 'theory proof', I have at times been able to mix modern theory with the games of the great masters. I hope you enjoy learning about this evergreen opening, and manage to pull off some wins in the style of a World Champion!

Judging from other books I have consulted on the Queen's Gambit Declined, it is by no means easy to decide which lines should be included.

If someone is indeed starting out with the Queen's Gambit Declined, they need a basic platform upon which to build up their knowledge and test ideas - and for this purpose I have selected the solid d5/e6 black pawn centre. It might be said that the gulf between the plans typical of this centre and the Tarrasch are as great as those between the Grünfeld and King's Indian.

I had less trouble deciding to omit the Ragozin and Vienna. I don't regard them as true Queen's Gambit variations. The typical way they start is 1 d4 Nf6 2 c4 e6 and here Black wants to answer 3 Nc3 with 3...Bb4, the Nimzo-Indian. After 3 Nf3, he is frustrated in his aim of pinning on c3 immediately, and so waits, continuing 3...d5 4 Nc3 Bb4 or 4...dxc4 5 e4 Bb4. Such play does not really fit in with the stra­tegic aims of the Queen's Gambit Declined.

Finally there's the Semi-Slav, where Black plays both ...e6 and ...c6 early on. This vast subject is an opening in its own right and here I would guide readers to Glenn Flear's Starting Out: Slav and Semi-Slav.