The store will not work correctly in the case when cookies are disabled.
Artikelnummer
LOWELTQI
Autor
Peter Wells 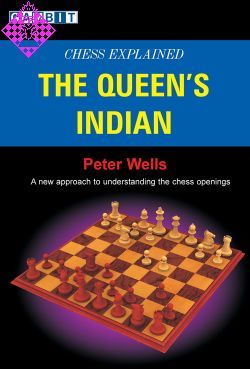 Chess Explained is a new series of books about chess openings. They are not theoretical works in the traditional sense, but more a series of lessons from a chess expert with extensive over-the-board experience with an opening. You will gain an understanding of the opening and the middlegames to which it leads, enabling you to find the right moves and plans in your own games. It is as if you were sitting at the board with a chess coach answering your questions about the plans for both sides, the ideas behind particular moves, and what specific knowledge you need to have.

The Queen's Indian is an important and popular opening at all levels of play. Black's flexible stance allows him to choose between a range of solid and dynamic structures. In turn, White can play flexibly, opposing Black's fianchetto, or can try to force the pace in the centre and start a hand-to-hand fight. It is an opening rich in nuances, and many of the modern main lines involve moves that look extravagant, but are backed up by a deep underlying logic.

1. The Logic of the Queen's Indian

There are a couple of crucial facts about the Queen's Indian which will reappear throughout the book and which are probably also the best place to begin to acquire a feeling for what this opening is all about.

The first is that it was initially developed by players, perhaps Nimzowitsch above all, who have often been characterized as 'hypermodern' or more grandly as part of a 'hypermodern revolution' which saw its heyday in the 1920s. They brought to chess a number of new and fascinating strategic ideas. Most significant in the context of the Queen's Indian was a rather fresh conception of how to struggle for the critical centre squares using the pieces. This contrasted with the classical emphasis on direct occupation of the central squares with pawns, and had the very healthy effect of hugely extending the range of openings which came to be regarded as playable. In addition, the Queen's Indian, in common with its close cousin the Nimzo-Indian, has benefited enormously from their much deeper understanding of how to base a strategy around control of squares of one particular colour. If these ideas seem familiar now, it is because, as is the case with many successful revolutions, hypermodern ideas have been absorbed and are now viewed as comfortably mainstream.

This brings us nicely to the second key point about this opening - it is a light-square based open­ing. The key contest is for the squares d5 and e4, as well as c4 which interestingly often becomes a focus for Black's counter-chances. In case this sounds a little esoteric, just consider for a moment that in the dark-square based openings beginning with 1 d4, such as the King's Indian or the Grünfeld, it is quite common for White to be allowed to set up a broad pawn-centre - one reason they were initially greeted with such horror by respectable opinion! Black in those cases is targeting the d4-square, and preventing e4 simply does not feature in the plan. The Queen's Indian, though radical at the time, was never frowned upon to this extent precisely because Black does seek to control e4 and prevent his opponent from setting up a broad pawn-centre as a matter of priority. Failure to do this tends to imply a failure of opening strategy.

My reference to the relationship with the Nimzo-Indian - 3 Nc3 Bb4! - also merits some clarification. Without treading on the toes of any companion volume, I think it is fair to say that a really logical approach to the position after 2...e6 would require White to form an opinion on 3 Nc3 first. The move not only threatens 4 e4 but keeps open the option of f3 (a move which if ventured prematurely is usually well met by the 'classical' ...d5) to support such future intentions. It is probably only a slight exaggeration to say that the popularity of 3 Nf3 and with it the Queen 's Indian is itself a great tribute to the Nimzo-Indian and the pin on the c3-knight that characterizes it. In turn, 3...b6 is very much a response to the more modest knight move - the fianchetto carries far fewer risks when White's f-pawn is blocked. It is only exceptionally here that White will be able to unblock this pawn early in the opening phase - and hence only in Game 22 that competition for the e4-square through use of the move f3 plays a central role.

An awareness of widespread respect for the ....Bb4 pin is also useful for understanding how White's principal options for development have evolved.

The most popular approach, 4 g3 (Chapters 1-3), aims to develop the kingside first and generally only to touch the b1-knight once the f8-bishop is already committed. This leads to an intense, but somewhat delayed, battle for e4 and d5. The other most popular move, 4 a3 (Chapters 4-5), enjoys a relationship with our discussion here which scarcely requires elaboration - conceding a tempo to prevent the pin almost defines the respect felt for it! The only eyebrow-raiser is probably the 4 Nc3!? of Chapter 6. Suffice it to say that what looks like a 'change of heart' regarding the pin is the dominant focus of the chapter introduction there.

I hope and believe that there is much less need to finish this section with a defence of the Queen's Indian as a varied, strategically rich and appealing opening than perhaps might have been the case 20 years ago. There undoubtedly was a time in the early 1980s when the opening became linked in the mind of the chess public, rightly or wrongly, with an excess of draws in elite events. It appeared to have lost its radical edge.

Even then I do not think that the fault lay intrinsically with the opening. Still, in the intervening period there has been quite a transformation in the riches to which it can give rise. The prevalence of 4 a3 for White from the mid-1980s onwards, Black's espousal of the generally more ambitious 4..Ba6 and a re-visiting of the 'hybrid' lines of Chapter 6 - all of these have tended to make the opening more varied and exciting without jeopardizing its fundamentally solid and reliable reputation. Now the Queen's Indian player may be equally at home with an active bishop on a6 while contesting the centre with pawns. Just as the hypermodern ideas that inspired it became absorbed into conventional theory, so the lines between varieties of methods of contesting the centre have become somewhat blurred and this has generally just served to make things more interesting. It is not for its drawish qualities that we shall find the majority of the world's elite - Kasparov, Topalov, Anand, Adams, Kramnik, Leko, Karpov, Gelfand to name but a few - on one side or other on the coming pages.

In keeping with the goals of the series, my overriding aim has been to bring the highest level of chess to the reader in the most accessible possible form.

In general the selection of games has also been determined by considerations of strategic clarity and, I hope, entertainment. What was largely ignored was the result. Accidents happen even at a high level, and the reader is advised to use his own judgement in conjunction with the commentary rather than the less rigorous method of checking the result!

I hope the material will appear reasonably balanced. Where a section has been granted more space - such as Chapter 3 covering 4 g3 Ba6 5 b3 - this is due to both its intrinsic importance and the mass of top-quality material that its fashionable status generates. While I have certainly sought to cover the most important variations, the priority has been to give a fairly comprehensive coverage of the wealth of different structures to which the opening can give rise.

Each chapter has quite a substantial introduction, which I hope will succeed in setting the strate­gic scene, as well as a brief conclusion. In general, despite the occasional pocket of rather denser theory, the Queen's Indian seems to me an opening in which an understanding of the major strate­gic themes can carry the practical player a long way. I will have been reasonably successful if the reader finishes the book sharing my confidence on this.