The store will not work correctly in the case when cookies are disabled.
Artikelnummer
SCOBOLE1C4C5FB
Autor
Victor Bologan 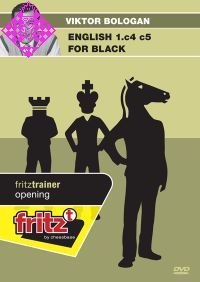 When White doesn’t want to get involved into tons of theory, when he thinks that he is better than his opponent and can outplay him in a long game, then he uses 1.c4, the opening called English. From the basic principles of chess two moves are ok for Black - 1...e5 and 1...c5, since both are aimed to control the centre. On this DVD Bologan recommends 1...c5 with very strict prescriptions on what to do on different white move orders. This discipline will help Black to have more clear ideas and plans against the white “playing mood”. 14 years ago Bologan started to play 1...c5 and until now he likes this move thanks to the rich type of positions arising after it, thanks to the aggressive and comfortable setups Black can get against the English Opening. “1...c5 is the best for Black!”