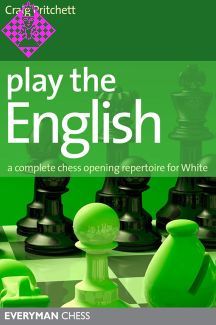 This book aims to provide a no-nonsense, straightforward introduction to key strategic ideas and developments in the English Opening. It is aimed primarily at the club and tournament player and is repertoire based. In writing this book, I hope that my readers will not just be entertained by the many great games it con­tains, but that they will also be inspired to play the English.

Apart from the variation 1 c4 e5, which should be regarded as a 'reversed' form of the Sicilian Defence, very broadly there are two main ways to play the English. Either White plays his central pawns, particularly his d-pawn, with restraint in the centre, usually combining this approach with a kingside fianchetto and slow ma­noeuvring, or he combines 1 c4 with 2 Nf3 and plays for a space-gaining break in the centre with an early d4 (with or without a kingside fianchetto).

This book covers both 'reversed' Sicilians and lines which combine 1 c4 and 2 Nf3 with d4 in mind. This is my preferred way of playing the English. Thus this book does not include many lines based on c4, g3 and d3 systems, except in the re­versed Sicilian lines, where this is a necessary and major exception. The book's main exclusion is those slow symmetrical English lines, where both sides fianchetto on the kingside and play c4/...c5 and d3/...d6. You don't have to play them.

Our approach is a full-blooded way to play the English. It perhaps suits players, like me, who have migrated to the flank openings from 1 e4. We like that early d4 idea. It reminds us of our aggressive roots in open 1 e4 play. Apart from that, playing the English this way offers a flexible bonus. We can enter all the lines in this book by playing 1 Nf3, except for the 1...e5 systems. If not in the mood to play the reversed Sicilian lines, opening with 1 Nf3, of course, rules out these lines altogether.

More on the Power of the d4 Pawn Break

Quite simply the English Opening is utterly sound and dangerous. All the world's great players play it and it is probably at its most popular in many of the more direct c4, Nf3 and d4 push or break lines, which take up a good deal of this book. The reasons for the popularity of this direct approach are very clear:

1) If Black doesn't contest the centre after c4 and Nf3 with early pawn moves to the fourth rank, an early d4 push by White, perhaps combined with an eventual e4, will result in an impressive c4, d4 and e4 centre.

2) Against an early ...c5 by Black, d4 followed by an exchange of pawns on that square will establish the basis for nagging Maroczy Bind pressure, based on a c4 and e4 pawn centre.

3) Against an early ...e5 by Black, d4 followed by an exchange of pawns on that square functions rather like it does in many 1 e4 openings, creating free central piece play and releasing potential for further space-gaining advances into Black's position.

4) And finally, if Black plays ...d5, without support by ...c6 or ...e6, White can eventually expect to exchange his c-pawn for Black's d-pawn, establishing an ex­tra white pawn in the centre.

Of course, it is all much more complicated than that, but White can clearly press in all these lines. So you get the picture!

An Overview of the Main Chapters

Chapters 1-3 deal with the positions arising after 1 c4 e5 which lead to a huge va­riety of reversed forms of the Sicilian Defence. Chapters 1 and 2 focus on The Eng­lish Four Knights with 4 g3, the main modern battleground and my repertoire choice. Chapter 3 deals with set-ups for Black that seek to avoid this tough as nails White system. A tempo up on 'real' Sicilians, White has the initiative. Black daren't risk the sharpest options open to White after 1 e4 c5 and must play with considerable care.

Chapter 5 covers the main line ...e6/...d6 and double fianchetto Hedgehog defences that can arise after a variety of move orders. Hedgehogs famously give up much of the centre to fight from a position of coiled potential on the first three ranks. White's extra space, active pieces and early initiative, however, allow him to play well into the middlegame in search of a genuine edge.

Finally, Chapter 6 addresses certain hybrid forms of the Nimzo-Indian and Grunfeld Indian Defences. White can battle for the advantage against these de­fences along purely English lines based on holding back any advance by White's d-pawn in the earliest stages. However, I have explicitly excluded Queen's Gam­bits and Slav, Dutch and King's Indian Defences. How to confront these essen­tially unavoidable lines, should Black insist on playing into them, is a matter of wide personal taste. Most 1 c4 and 1 Nf3 players transpose to (1 d4) main lines.

Making Practical Use of the Repertoire

All opening books writers are positively deluged by data. I couldn't have covered the English sensibly in one book without adopting a repertoire approach and he­roic summarization. It's the same for you, dear reader. All of us, these days, fight a losing battle if we try to take on board 'everything'. So my first point is simply to stress what we all know - don't expect to be spoon-fed by this or any other book. Look for ideas, explanations and ways to play, rather than immutable variations. Then release your inner artist and work hard to find your own way when you work on your game and particularly when you actually play.

Secondly, I'm young enough at heart to stress just how important it is simply to enjoy the game. Chess is not a static art. It' s an ever-changing adventure. That's one reason why I invariably try to write opening theory into fully annotated games. Chess theory develops through play. In writing books on such vast sub­jects like these, I'm always struck by the phenomenal creativity of all those play­ers, at all levels, who have ever played the opening. I feel connected to all these minds and it inspires me. I trust that it also inspires you, as the book's title sug­gests, to play the English!

Thirdly, use this book as a starting point. I am sure most readers will gain value by reading it without access to computer engines and databases. But at whatever level you play and whether you use or do not use computers, watch out for new ideas in lines you like and note them. If you use computers, you can do this much more effectively, of course. Whatever you do, enjoy it.

I will finally emphasize that I have written this book from the standpoint of a practical player and can assure you that the repertoire is not just reliable but a good one. I have perhaps paid slightly more attention to ensuring that the reader understands how to play the white side well, but in doing so I have not con­sciously tried to underplay Black's chances. Like you, sometimes I also play Black and against the English!

The English is a sophisticated opening which has been popular amongst players of all levels for many years: from up-and-coming players to World Champions such as Garry Kasparov and Vladimir Kramnik. One of its main attractions is its flexibility: it can lead to situations rich in both tactical and positional play; it can be played either aggressively or quietly; and opponents also have to be wary of subtle nuances or else risk falling into one of its many move-order traps.

In Play the English! Craig Pritchett produces a comprehensive and yet practical repertoire for White, presenting an answer to all of Black's key defences, whether they are in the crucial main lines or the tricky offbeat variations. Drawing upon his wealth of experience in this opening from both sides of the board, Pritchett highlights both the positional and tactical ideas for White and Black. A study of this book will arm you with the essential knowledge to begin playing the English with confidence in your own games.

Written by an opening expert

is an International Master and a former Scottish Champion who has represented his country on top board at numerous Chess Olympiads. He is currently Schools Chess Development Director for Chess Scotland. This is his second book for Everyman Chess; the first was Starting Out: Sicilian Scheveningen .
Details
Inhalt