The store will not work correctly in the case when cookies are disabled.
Artikelnummer
LOWATENG
Autor
John L. Watson 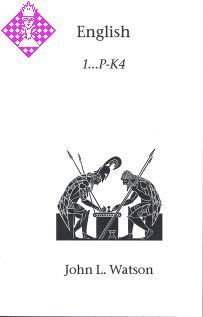 An authoritative series: John Watson's systematic coverage of all variations of the EngIish Opening. V.S. International Master John Watson's classic work on the English Opening is still the only comprehensive treatment of this dependable opening, one which has always had a large following among the world's best players. Some of the finest games of modern chess, both positional and tactical, have begun with 1 P-QB4. By virtue of its extraordinary flexibility, the English can lead to unique and original positions at an early stage of the game. Volume 1 covers all lines after 1 P-QB4 P-K4, Black's most popular reply to the English Opening. It often leads to sharp, tactical play with attacking chances for both sides. The book is logically organised and unIike some works on this opening includes transpositional possibilities at all stages by cross-reference to other Iines. Watson's aim throughout has been to provide a practical balance of theory, discussion and examples. With encyclopaedic coverage and many original suggestions, this series gives the reader the ability to und erstand the complexities of the English Opening and to play it with confidence.

International Master John Watson is widely known as a player, author, and chess trainer. His books have won numerous awards including Book-of-the-Year awards for "Secrets of Modem Chess Strategy" and "Chess Strategy in Action".

236 Index of Variations and Transpositions