Everything about the Slav 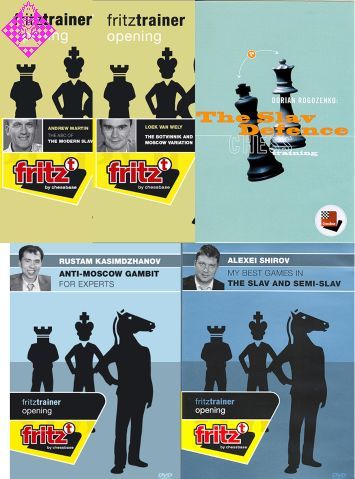 Whether solid or sharp: In the Slav or Semi-Slav it often is Black who sets the pace. While the Slav Defense (Black usually develops his bishop to f5) is considered to be very safe and difficult to crack the Semi-Slav (Black plays an early e7-e6 and usually puts the Bc8 to b7) allows Black to spice things up and in many forced lines better preparation alone may help him to put his opponent into a difficult situation. Both systems are currently extremely popular and have replaced the Nimzo-Indian-Queen's Indian-Complex as main weapon against 1.d4, and they form an established part of the repertoire of almost all top players. The Semi-Slav also played an important role in Vishy Anand's repertoire when he successfully defended his World Championship title against Vladimir Kramnik in Bonn 2008.

In the "Everything about the Slav" package three top players, one opening theoretician and a renowned and experienced player thoroughly train you in the Slav or Semi-Slav Defense: