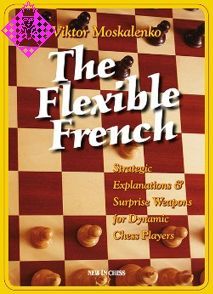 The famous French Defence is one of the most widely-played chess openings. It is a fighting opening, which perfectly suits many club players as well as a growing number of top players.

The Flexible French is a revolutionary repertoire book for both Black and White. Viktor Moskalenko presents a wealth of original and dynamic options in every main line, proving that the French is a very lively and intriguing defence.

The Ukrainian grandmaster's analysis is high-level, yet his touch is light and fresh, and the book sparkles with original ideas. In his own inimitable style, Moskalenko gives the reader new gusto for the French.

This extremely accessible book rounds off with seven relatively unknown weapons, early deviations with which you may surprise your opponent - as Black or as White!

Original Variations for your Repertoire

The French Defence is a gem in any chess player's opening repertoire. The main difference in comparison to other great openings is the display of knowledge and concepts that are required here, instead of a constant memorisation and repetition of long, forced, 'theoretical' lines. The middlegame and, with it, the real battle be­gins at a very early stage.

This 'Flexible French' book is an attempt to mix various aspects: my general expe­rience in this opening, new concepts and analysis of several creative lines. Its pur­pose is to offer a combative repertoire to black players, and also to offer white players some sharp ideas.

With 1...e7-e6 Black builds a fortress with a closed centre, so the main roads to success are those leading to a game where White's extra tempo is not so important. This defence is also full of strategic as well as tactical resources, and according to many masters, its lines are among the most complicated in chess. There are also several forgotten systems that are still full of possibilities, sharp and exotic lines, original ideas and much more.

The current state of opening theory

During the past few years - the computer days - many books by vanguard authors have seen the light, with ambitious names like: 'Beating the Spanish, the Sicilian, the French' and many others. Some authors even churn out books of this type up to 3-5 times a year!

Please note that the Grand Masters, such as Botvinnik, Petrosian and also the best modern players, work on the study of their systems much more slowly, but with great depth - learning and practicing them year after year. The evaluations of their ideas hardly change, at least not as abruptly as in these new books.

Also, I think that a new time has arrived for chess books on opening theory. In­stead of copying thousands of games that are played each day and presenting the analysis by the engines, it is much more effective - and more positive - to compose a book with articles according to a different concept: with space for background information, an instructive selection of the material and conclusions drawn from this material.

The reader of The Flexible French will find it the easiest and the most interesting to learn the main plans with the following structure in each Part:

I hope that my previous book The Fabulous Budapest Gambit and the present work can serve as good examples of this new method of writing opening books.

Of course, many questions will always remain open, for practical players as well as theoreticians.

Good luck with the study and the practice of a genuine opening - The French De­fence!

009 Part One - The Black Queen's Musketeers

027 Chapter 2 - Labyrinths of the Old System

211 Part Four - Behind the Barricades

279 A Brief Biography of the Author/Bibliography