The store will not work correctly in the case when cookies are disabled.
Artikelnummer
SCOKASBTF1
Autor
Rustam Kasimdzhanov 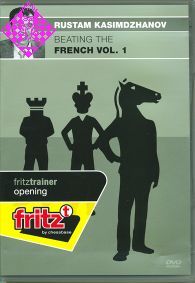 In his DVD series on the French Defence, Rustam Kasimdzhanov presents a promising White repertoire based upon 3.Nc3. Topic of the first DVD is the position following 1.e4 e6 2.d4 d5 3.Nc3 Bb4 4.e5, in which the pawn on e5 secures the first player a space advantage in the centre and on the queenside. In 13 video lessons the author shows how White has to use his trumps to get an attack on the king or a better endgame. During 3.5 hours of analysis, featuring mostly topical games of top grandmasters, Kasimdzhanov conveys valuable knowledge of attacking ideas, typical manoeuvres and plans in an easily understandable way.