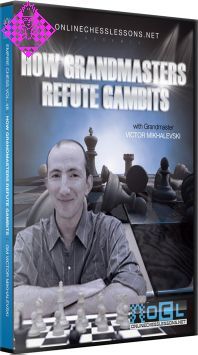 Gambit openings are experiencing a resurgence of popularity at all levels of chess in the 21st century as players seek to catch their opponent off guard and gain decisive advantages early in the opening due to superior preparation in a specific gambit.

In the Empire Chess DVD "How Grandmasters Refute Gambits" Grandmaster Victor Mikhalevski explains how viewers can dominate with the black pieces against the Scotch Gambit, Goring Gambit, and Danish Gambit. These three gambits can be extremely dangerous if you are caught unprepared, and it is very easy to lose yourself in the complications early in the opening and lose in less than 20 moves! GM Mikhalevski demonstrates how black can convincingly defend himself and fight for a long-term material advantage with conceptually based defensive schemes.