Shirov, My Best Games in the Grünfeld 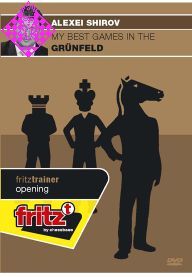 The Gruenfeld Indian is an active and dynamic reply to 1.d4 which can lead to complex and extremely sharp positions. So it’s no wonder that also Alexei Shirov included this opening – which at its début in tournament practice was called ”hypermodern” – into his repertoire. At the candidates’ fi nal against Vladimir Kramnik in Cazorla in 1998, he exclusively – and successfully – trusted the Gruenfeld Indian with Black; the victory over Kramnik gave him the right to play a WCh match versus Kasparov. In the fi rst part of the DVD Shirov extensively comments his fi ve Black games from the Kramnik match, giving deep insights into opening preparation and match strategy on highest level. In the second part Shirov reveals, among other things, how in his opposite-coloured bishop endgame against Topalov in Linares in 1998 he found the amazing and unique move, which will secure the game a place in chess history forever. And this is not the only fl ash of inspiration the Super Grandmaster will present in his videos ... Running time: 5:25 hours