The store will not work correctly in the case when cookies are disabled.
Artikelnummer
SCOPERPTF
Autor
Nick Pert

Solid and Safe against the wild Indians: 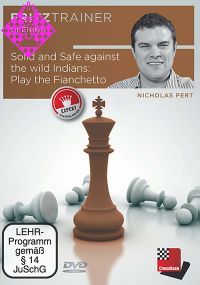 The King’s Indian and Grunfeld are notoriously tricky and theoretical openings. The Fianchetto variation avoids the main lines which Black players enjoy, and goes for a small but safe edge. Many people fear playing against the King’s Indian because of Black’s ability to attack the White King, but in the Fianchetto variation it is very hard for Black to generate any attacking chances, instead play is often positional, with White having slightly more space for his or her pieces. The Grunfeld is renowned for long forcing lines, that often lead to a draw, but the Fianchetto variation cuts out all these lines and you just get a position to play, whilst almost all

of the pieces are still on the board. In this DVD I have gone a long way to finding the best lines for White to gain an advantage against Black’s various responses. I have played the Fianchetto variation for over 20 years now, and at the time of recording this DVD I have been unbeaten with White. This run will surely come to an end soon, now I have said that, but it is in no small part due to having a repertoire whereby White is able to safely push for the win, with a certain amount of drawing margin in hand in case things start to go wrong! I have concentrated on both theory and ideas.

I hope you learn a lot from watching this DVD, which will provide you with a long term opening repertoire against both the King’s Indian and Grunfeld. It doesn’t require a ton of theory, but does offer real chances for an opening advantage.

GM Nick Pert is a chess grandmaster from England who has regularly played for the England team in Olympiads and European Team Championships. He is a former World U18 chess champion and is the current National Head Coach of the English Chess Federation