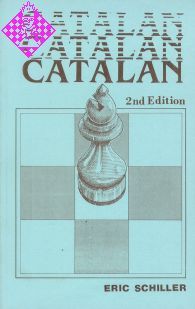 Eric Schiller has thoroughly revised his 1983 book which was the first major English-language publication on the Catalan Opening. A complete repertoire against 1 d4 Nf6 2 c4 e6 is presented. Original analysis from the first edition was widely used in recent Soviet work. Fresh analysis of critical lines, all the latest games, and the 1987 opinions of leading theoreticians are all included.

Preface to the Second Edition

Since the first edition of this book appeared there has been a great deal of activity in the Catalan. Under the patronage of Gary Kasparov on the road to his World Championship victories, the opening was seen in tournaments throughout the world, with White scoring many fine successes. When I was approached in 1985 by the German publishing house of Walter Rau Verlag I undertook a revision of the Catalan, which appeared in 1986 under the tide "Wie spielt man Katalanisch".

Such has the popularity of the Catalan grown that I find it necessary to thoroughly revise the book again for the present English edition. Works by Neishtadt (1986), Janicki (1986) and Moiseyev & Ravinsky (1984) have been consulted. I have taken into consideration all developments up to 12/31/87 and have tried to incorporate all suggestions and criticisms made of the original work, but have generally stayed with the recommended variations of the first edition, which retain their vitality.

I have continued to approach the book as a repertoire book, and choose only the lines considered best for White. In fact, I have had to follow this policy more strictly for reasons of space. Nevertheless, I have expanded coverage of the relevant Tarrasch, Bogo-Indian, Queen's Indian, Dutch and Anglo-Benoni lines which arise by transposition (The Benoni lines with g3 will be discussed in a future volume providing a repertoire for White against 1 d4 Nf6 2 c4 g6. I have adopted a stronger White perspective than in the first edition, with less discussion of lines which are not promising for White. The first edition of this book was a groundbreaking effort. Now there are detailed treatises such as Moiseyev & Ravinsky (1984) and Neishtadt (1986) which can be used as additional reference works. This book is intended to supply a complete opening repertoire for White against 1 d4 Nf6 2 c4 e6. There is still no room for annotated games, but I have added some complete games, and provided extended coverage of others so that the exploitation of the advantages gained by White can be illustrated. To save space, I have resorted to a somewhat greater use of symbolic notation, but not at the expense of discussion of ideas. Basically, I have just substituted ± for "White has a slight advantage", °° for "unclear" and similar replacements.

The look of the book has changed considerably, as little Alice, the Commodore 64 computer, gave way to the powerful Adric, the Levco-enhanced Macintosh. The manuscript was composed using Microsoft Word 3.01 with the Pillsbury Laserfont from Chessworks Unlimited (available from Ecological Linguistics, P.O. Box 15156, Washington, D.C. 20003), and printed on an Apple LaserWriter Plus courtesy of the Humanities Computing Facility of the University of Chicago. The short form (Batsford style) notation was maintained because it would have been too much work to convert it to my usual (standard) form. Material is current to 1/31/88.

I would like to briefly respond to one critic who accused me of taking advantage of Gary Kasparov by writing books (Catalan, Play the Tarrasch) about the openings he plays. While there would be nothing objectionable in that if correct (in fact, Leonid Shamkovich and I are working on such a project at present), the plain truth is that I wrote the Catalan (and Play the Tarrasch) before he started playing them, and the manuscripts were made available to the Kasparov Team. I have no reason to claim any credit for the success with the opening in the World Champion's hands, and further point out in the text one place in which a more careful reading of the Catalan would have helped considerably! I acknowledge that I have taken advantage of my position as research editor of BCO and incorporate some of the ideas which the World Champion has introduced in the 2nd edition (to appear in 1988). I would also like to thank my friend and frequent co-author Leonid Shamkovich. I always try to give appropriate credit for ideas introduced by other authors, and cite games where moves are played. Unfortunately, two otherwise respectable sources create great problems. Moiseyev & Ravinsky (1984) and Neishtadt (1986) unforgivably ignore the existence of Lev Alburt and give his games as if they were original analysis. Some of my analysis is quoted in the latter book without attribution. Janicki (1986) is much better, but he too fails to note sources at times . I have done the best I can under the circumstances!

Many people have provided helpful comments and criticisms of the first edition. During the 1983 Kasparov-Korchnoi match, the press room copy of the book was constantly consulted, and this resulted in helpful comments from Jon Tisdall, Robert Byrne Raymond Keene and many others

who were analyzing the Catalan games from the match. In a similar manner I picked up a lot of analysis in Moscow while covering the 1984-85 marathon match, especially from Yakov Neishtadt. Leonid Shamkovich provided valuable insights into the opening in the course of our work on another book. Antje Braga's fine translation into German included a number of corrections which have been incorporated here. Thomas Magar's excellent proofreading eliminated the typographical errors which might have been carried over from the first edition.