1.Nf3 - Opening for White according to Kramnik 1b 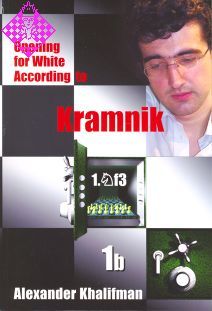 Concept of the Series

It is not exactly a book about openings, at least not in the general­ly accepted fashion. It is not about the move 1.Nf3 and not about the Reti opening at all. This book is about how to solve your problems in the opening once and for all with the help of Vladimir Kramnik (who is a friend of mine and a co-author behind the scene...) under my supervision.

The idea to write that book came to my mind a long time ago. Chess players have always had the problem of a choice of openings and that is even more important in contemporary competitive chess. It is not a secret anymore that presently plenty of games are won thanks to the superior preparation of one of the players and mostly due to the correct choice of an opening. How to do that? How should one choose, what is appropriate for him, amidst an ocean of opening schemes, plans and variations?

One of the ways of solving that problem is to choose one of the leading contemporary grandmasters, whose style of playing suits you and whose successes you admire as the ideal model and to build up your opening repertoire based on his preference. There are some difficulties here, though... At first, it is who to choose as a pattern to imitate and secondly how to start playing the opening like your model? Naturally, you can select his games from the database and you can try to study them. Still, that is far from simple too. Your future opponent might be completely ignorant about the newest theoretical discoveries, played at the top level, and he might try at any moment some mediocre move, avoiding theory. Then, you will have to find yourself what to do next, what plan to follow and how to obtain the advantage.

Grandmasters do not just play certain openings. Their opening repertoire is the product of an entire concept. To put it in another way, every grandmaster uses a certain number of schemes that he knows well and he likes to play and he strives to follow them reach­ing his well familiar positions. (For example, whoever likes to play with Black the Queen's Gambit usually attempts to reach the typical lines of that opening after 1.c4 as well as after 1.Nf3.). Finally, every grandmaster has spent hundreds of hours on building his opening repertoire and he is ready to counter all possible surprises.

I suggest that you saved plenty of time and effort and I am ready to solve your opening problems for you when you play White. We will learn how to play openings "according to Kramnik". There is a catch here though... Kramnik's opponents are usually grandmasters and it would not come to their minds to make a very bad move, while your adversaries might easily do that and you will have then to react correctly yourselves. You will find the right solution of that problem in this book! In fact, this is a book about players who would like to play the opening like Kramnik, but whose opponents are expected to be slightly weaker than Anand and Topalov...

Whenever Kramnik begins his games with the move 1.Nf3, he does not intend to play the Reti opening at all. He simply wishes to obtain pleasant positions in case his adversary plans to choose the Queen's Indian Defence, the Gruenfeld Defence or the Benoni Defence.

The player who wishes to study (or to improve) the right way of playing the move 1.Nf3 with White, should not necessarily be a spe­cialist of the Queen's Indian Defence and even less of the Gruen­feld Defence. After you have studied that book, you should always manage to enter well familiar positions (that is quite enjoyable...!) and you will feel comfortable if you know the standard strategical and tactical motives and ideas typical for that opening. You will also master how to obtain the advantage not only after Black's theoreti­cally correct play, but also whenever he plays inferior moves.

Meanwhile, it happens only very seldom that people who are be­low the level of a master play closed openings. They usually consider the positions arising after 1.d4, or 1.c4 as very dull... They prefer starting with 1.e4 and after 1...e5, they like to analyze some exciting openings like the King's Gambit, the Evans Gambit etc...

Play 1.Sf3! and your inexperienced opponent might make a mis­take right in the first several moves and then attack forcefully! Fol­lowing my recommendations, even if your adversary plays the open­ing correctly, you will obtain positions with initiative and then it all depends on you. It is all in your head.

This book is devoted to the contemporary variations of the classical system of the King's Indian Defence. I classify into that group the lines in which after: 1.Nf3 Nf6 2.c4 g6 3.Nc3 Bg7 4.e4 d6 5.d4 0-0 6.Be2 e5 7.0-0, Black plays 7...exd4, 7...Na6, or 7...Nc6. This definition might seem to you to be a bit unusual, but I believe Black's hopes to obtain a good counterplay are based mostly on these variations, in which the opening theory is developing most intensely.

The system with 7...exd4, used to be considered as not so good for Black for many years. It looked like Black had to defend a strategically difficult position with his chances mostly based on some tactical tricks. Still, in the middle of the 90ies of the last century, largely due to the ef­forts of grandmasters Anthony Miles and Igor Glek, there gained popu­larity an effectively new system: 7...exd4 8.Nxd4 Re8 9.f3 Nc6 10.Be3 Nh5!?, in which Black opts immediately for an active play on the dark squares. The theory of that variation evolves nowadays too, although White has found ways to obtain a positional advantage, which are ana­lyzed thoroughly in the corresponding parts of our book.

The 7...Na6 system starts with a move, which would hardly be ap­proved by the classics ("The knight at the edge of the board..."), but it is in fact a typical example of the contemporary treatment of the open­ings. This idea of GM Leonid Yurtaev, who began to use that develop­ment of his queen's knight in almost all the variations of the King's Indian Defence, found its new adherents quickly at almost all levels. At one moment, it seemed that move of the knight at the edge of the board might even become the main line for Black, exceeding the popularity of the traditional move - 7...Nc6. Later, practice showed that the opin­ions of the classics should not be disregarded and White found plenty of advantageous lines and most of then are based exactly on exploiting the irregular placement of Black's knight on a6. We have done our best to analyze thoroughly the new ideas for White and in particular the sharpest variation - 8.Be3 Ng4 9.Bg5 Qe8 10.c5!?.

Finally, the last and of course the main part of our book is devoted to the variations with the move 7...Nc6. It is worth mentioning that mostly thanks to the efforts of Vladimir Kramnik during the second half of the 90ies of the last century - the system with: 8.d5 Ne7 9.b4, became extremely fashionable and especially the variation: 9...Nh5 10.Re1. Meanwhile, the greatest contribution to the theory of that sys­tem we owe to several games between Kramnik and Topalov. If we have in mind - there will be a unification - match in the autumn of 2006 between these two players, this book is coming out of print as if at the best possible moment! We should not be surprised if these two adver­saries might decide to relive the past and to test in practice the newest discoveries of the opening theory and the new original analyses col­lected on these pages?!