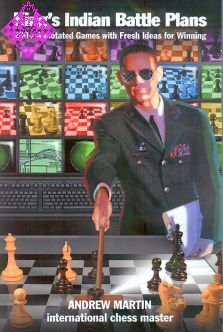 Most books on chess openings are just full of variations with little in the way of guidance or plans - this huge book is different. Not only is it loaded with top notch annotated games by international master Andrew Martin, one of the world's experts on this system, but the games are peppered with hundreds of "ideas."

These suggestions show you new plans, or possible plans, and what happens in the current game under scrutiny. Often at the end of each game is a quick summary of what Martin assesses concerning the line which was used.

The best players in the business, mostly from the last 6-7 years, are shown to be formidable masters with games that include quick wins as well as strategical masterpieces. The names of Korchnoi, Kasparov, Kramnik, Fischer, Vaisser, Nunn, Topolov, Murey and many more are spread across the landscape in a vast field of possibilities.

All the lines of the KID are discussed in detail proportional to their actual use in the real world of tournament play:

The book contains nearly 400 complete games with over 240 annotated. The power plays, the counterattacks, and the ruthlessness of this "defense" are revealed and now available in this first big book written about the King's

Martin has written and edited "Winning with the King's Indian" as well as many monographs on chess openings for the British press. He lives in England with his wife Alison and their children.

Recently I went to the World Youth Championships in Crete as one of the English seconds. We thought that we prepared our young players properly for the games, analyzing all sorts of positions, the quirks of each individual opponent, surrounded by piles of the latest theoretical manuals, referring extensively to ChessBase. The work went well, but in a few cases and exclusively against the higher-rated players, the specific opening work refused to strike gold-the opponent always seemed to deviate.

I puzzled over this. These guys weren't hopping from opening to opening; that would take a phenomenal amount of hard work. Instead they changed their play WITHIN the opening, subtly altering variations, tweaking move-orders and that was enough to throw our preparation off-balance. To spend all morning reseaching the Exchange Ruy Lopez and then to be confronted with the Worrall Attack is most disconcerting. But... excellent tactics given the new and fast FIDE time control and very much the modern game.

Only a barrage of ideas will win you a tournament these days.This book doesn't make any attempt whatsoever to be exhaustive. Every variation will NOT be covered although there is something for everyone here. The approach is a little different. Instead it's a compendium of King's Indian play, an unashamed collection of variety and ideas... an arsenal. It's an attempt to encourage you to become a more versatile, modern competitor with plenty of thoughts running through your brain and tricks up your sleeve.

I like all the games included here and I learned something from each of them. I try to show no bias between White and Black. Most are very recent but there are older classics too. I've organized the games into the traditional variations and I've given my thoughts and recommendations where appropriate.

Chess has changed. We must embrace the change and move forward positively.

006 A Note from the Publisher

022 How Not to Play the King's Indian