A Modern Way to Play 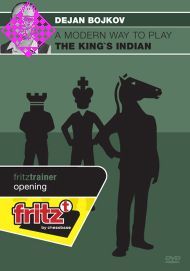 The Zürich Interzonal of 1953 and the marvellous annotations of David Bronstein changed our understanding of the KID. From a second-class opening, it became one of the most aggressive and dangerous setups for the second player. Back in those days players tended to develop their queen's knight to d7. Later a more central approach came into fashion and the knight found a good square on c6. Current practice though, has revealed that there is one more good square for that piece - the a6 one. From this new outpost the knight is heading for the centre without obstructing its own bishop. Bulgarian GM Dejan Bojkov is one of the true supporters of such a development.

In this DVD you will find a repertoire based on flexible development whenever pos­sible, and an explanation of some strategic nuances of the KID. The author shares with you a lot of novelties that he had prepared throughout his study of the lines.

The Bulgarian crack GM Dejan Bojkov provides the user of this DVD with a complete Black repertoire on the King's Indian Defence.

With 7.d5 White will reach an inferior Benoni line so he is forced to take the pawn on d8.

Bojkov provides the Black player on this DVD with an original repertoire line that needs not too much memorizing as we can see on the lines below but I can promise you there are a lot of original analyses on this DVD and some times even brand new novelties!

Video running time is over 5 hours!