The store will not work correctly in the case when cookies are disabled.
Artikelnummer
SRODZIB1D4P1
Autor
Roman Dzindzichashvili 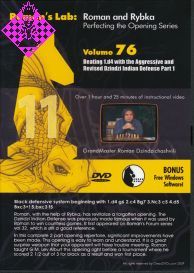 Roman, with the help of Rybka, has revitalize a forgotten opening. The Dzindzi Indian Defense was previously made famous when it was used by Roman to win countless games. It first appeared on Roman's Forum series vol.32, which is still a good reference.

In this complete 2 part opening repertoire, significant improvements have been made. This opening is easy to learn and understand. It is a great surprise weapon that your opponent will have trouble meeting. Roman taught G.M. Lev Alburt this opening right before a tournament where he scored 2 1/2 out of 3 for black as a result and won first place.