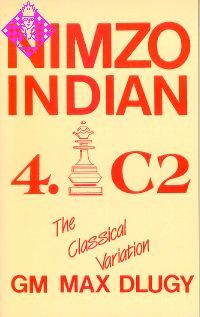 GM Max Dlugy here presents the definitive study of the Classical Variation of The Nimzo-Indian with 4 Qc2. He provides reliable assessments of all significant variations with clear statements as to why a line is viable or not. With some 200 diagrams to lead the way, the author has clearly organized his material to make it readily assessable by ECO codes. He includes significant games in entirety to illustrate the flow of the game to conclusion. Tournament and correspondence players will have to have this important theoretical work to prepare for their next Nimzo-Indian!

When a grandmaster sits at home preparing for his next "big" tournament, he invariably looks at the latest games that have just been played. One such day I found myself wondering: why is everybody playing that drawish line in the Nimzo-Indian?

Eventually I reached out and grabbed Taimanov's book on the opening, written in Russian, hoping that he would explain it all to me. To my surprise all I found was clear evidence that Black can and does equalize in virtually every line in the 4.Qc2 variation.

I decided people play it for its surprise value and was satisfied with that. Still, the games kept on coming. After Seirawan had done most of the promotion for the 4.Qc2 line in the early 1980s virtually every top player in the world has adopted it at least once, but it is only when Kasparov and Karpov started to employ the variation on a regular basis that I began thinking about taking a good long look at it myself.

After analyzing the 4.Qc2 variation for many months I found that Black does indeed have problems equalizing, and that there is no solid way for Black to meet it without sweating it out first. So I guess it goes without saying that the 4.Qc2 Nimzo followers might see another grandmaster join their ranks in the near future.

The 4.Qc2 variation, or the Classical Variation, as it has often been called, enjoyed enormous popularity in the pre-WWII years, until Black found resilient systems of defence against it. After that it took the first player many decades to come up with new, interesting ideas to prepare the second coming of the Classical Variation.

One important reason for the popularity of this variation is White's reluctance to play with the crippled pawn structure when Black captures on c3. After years and years of effort, White has been unable to make great progress in obtaining an advantage in the 4.e3 lines and has decided to at least keep his pawns intact.

As enormous amounts of material that have been gathering dust over the years has been compiled under one roof I had to take steps to preserve my sanity in the composition of the book.

For this reason I have:

2. Taken out all the references to the names of the tournaments, since in my experience that hardly does anything to promote a better understanding of the variation while clouding up the real information.

3. I have used the number for pawn captures only when necessary to avoid confusion.

The material presented here is based on all analysis or games that have been available to me up to October of 1989. There is a lot of original analysis in this book and usually if I do not refer the reader to a specific author or a game the variation should be credited to me.