The store will not work correctly in the case when cookies are disabled.
Artikelnummer
LOGALACRBOG6
Autor
Joe GallagherAndrew Martin

Based on …g6
Eigenschaften
Sonderangebot 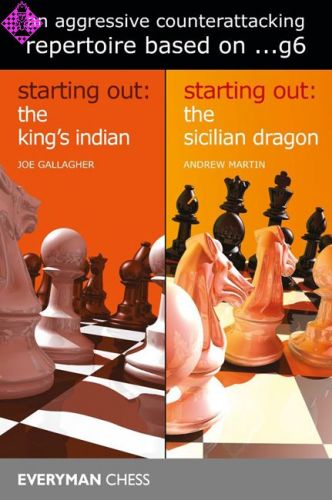 The King's Indian is one of the most exciting defences in chess and is favoured by ambitious and aggressive players. At the highest level it has been a major weapon for World Champions Bobby Fischer and Garry Kasparov. In this easy-to-read guide, Grandmaster Joe Gallagher goes back to the basics of the King's Indian, studying the key principles of its many variations. Throughout the book there are an abundance of notes, tips, warnings and exercises to help the improving player, while important strategies, ideas and tactics for both sides are clearly illustrated.

In Starting Out: The Sicilian Dragon Andrew Martin studies this famous opening in a simplistic way, introducing the crucial initial moves and ideas and taking care to explain the reasoning behind them, something that has sometimes been neglected or taken for grantedFew would disagree that the Sicilian Dragon is one of the most exciting, high profile and controversial openings in chess history. Right from the very beginning of the game Black chooses to unbalance the position, thus maximising his or her chances of playing for a win. The positions reached are dynamic and of a highly tactical nature, with both players very often going straight for each other's throats in search of a quick-fire knockout blow. In these razor-sharp encounters, it goes without saying that one slip by either side can prove to be fatal. Because of its aggressive nature, the Sicilian Dragon is very popular at all levels of chess, while it received an ultimate seal of approval when Garry Kasparov used it as his main weapon to beat Vishy Anand in a World Championship match.

Starting out: The King's Indian

Starting out: The Dragon:

187 Other Tries for White