The store will not work correctly in the case when cookies are disabled.
Artikelnummer
SCOBOLBTSB
Autor
Victor Bologan 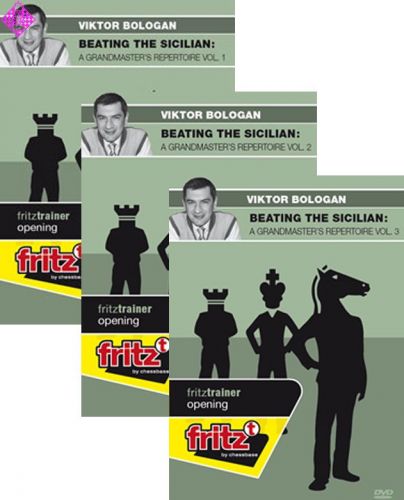 Out of the dozens and dozens of openings played nowadays the Sicilian Defence remains the most fascinating, entertaining and complex opening. Here White understands that Black will not be a patient lamb but will try to get at him at the very first opportunity. For those who are ready to take on the challenge and plunge into the wonderful world of combinations, attacks and counter-attacks, for those who really love chess... this DVD is designed for you. In the first volume of the Open Sicilian for White we present all black reactions to 2...Nc6 3.d4 cxd4 4.Nxd4. This includes the Sveshnikov/Cheliabinsk Variation, the Rauzer Attack, the Maroczy Bind and a few other minor side lines. The approach is typical for Bologan’s DVDs, as he tries to describe in a compact format plans and reactions from White’s point of view. With the help of this DVD one can forget about fears concerning the tons of theory in the Open Sicilian and can get straight into the real fight! Video running time: 6 hours

The second volume of the Open Sicilian is dedicated to two very important areas: the most interesting opening of all time the Najdorf Variation, and also to the most romantic line in the Sicilian - the Dragon Variation. It’s actually enough to point out that both openings were played successfully by Garry Kasparov with Black. The author’s task was to give White some clear lines which will survive all kind of possible improvements from the black side and still be able to give White hope for an advantage. In both cases Bologan recommends a setup with f3, Be3, Qd2, the so-called English Attack. The similarity of ideas makes the job of memorising lines somewhat easier, and at the same time the traditional line by line approach allows the avoidance of any unpleasant surprises. Many mysteries under the surface of the Sicilian can be found by hard work and experience and the author really hopes that this DVD will help you in that! Video running time: 5 hours 40 minutes.

In the third volume of the Open Sicilian we will deal with Black’s second move 2....e6 which he usually adopts when striving for a complex game full of subtleties in order to outplay White, especially when his opponent is lower rated. But the reverse of the medal is that Black assumes quite high risks, and with strict reactions White can pose him serious problems. Of course the DVD is mainly dedicated to all kinds of Paulsen lines with 4 ... a6 and 4 ... Nc6, where against most of the main variations I advise the same setup we use against Najdorf and Dragon with Be3, f3 and Qd2, usually followed by long castle. Despite the many games being played every day, Black is still far from safe equality here. Apart from some side lines like 5 ... Bb4, quite important is to learn how to play the classical Keres Attack. After 6.g4, my recommendation, only the variation with 6 ... e5 still poses White unpleasant questions - to which of course I have tried to come up with some answers... With the final word on the Sicilian trilogy, I would encourage the viewer to play the Open Sicilian and to have the DVDs as partners, consultants and if lucky a friend in both critical and good situations. Video running time: 5 hours.
de