How to defeat the Smith-Morra Gambit: 6...a6 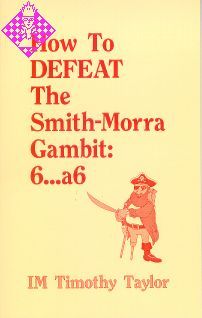 Some masters are rumored to keep their best analysis secret when they write an opening book. No proof has been offered, but the speculation remains as we know that top players like to win, and keeping surprise moves in reserve sounds logical.

This claim cannot be lodged against EM Tim Taylor. He only writes about the chess that he plays, and he lays out his best analysis for everyone to see, as for example in his Rubinstein Variation, Nimzo-Indian Defense.

In this book Taylor reveals the secret as to why the best line against the Smith-Morra Gambit has been so widely overlooked, and clearly demonstrates the strengths of 6...a6 when it is aggressively followed up. Tim Taylor is an very accomplished author and the reader will enjoy the style as well as the contents of this remarkable book.

The player who uses the Sicilian, as I do, as his main defense to 1.e4 must of necessity confront the Smith-Morra Gambit. It is important to take this gambit seriously: consider the well known case of Grandmaster and World Championship Candidate Svetozar Gligoric, who gave up a Gambit Accepted draw to the virtually unknown Pokojowczyk in 1971 (see the notes to Game 2).

Not wishing to share Gligoric's grief, I have seriously studied the Black counters to the Gambit for twenty years. I believe my results speak for themselves: six wins, no draws, no losses. I defeated such opponents as current US Champion Patrick Wolff (though the game was played long before he won that title), IM Jim Rizzitano, and various amateur gambit specialists. Also, in a game specially played for this book, I defeated my Zarkov chess computer. If I learned one thing from these games, it is that Black must attack. Passive play may allow White to work up adequate pressure for the pawn. Black must strive to take over the initiative at the earliest possible point.

Part I of this book presents three introductory games which explain how Black should not play. This section includes the famous Fischer - Korchnoi game from Buenos Aires 1960, which has been incorrectly analyzed for 33 years. In this book I point out the errors of both players and analysts, and try to give the first objective look at this important game.

These losses have induced White players to seek improvements on move 8, such as Qe2, Bf4, a3, and h3. The failure of these systems is demonstrated in Part III, Games 7-11.

Can we conclude then that the Gambit is refuted? No, for just as pawn-snatchers will always happily pile up their material, so gambiteers will always seek new avenues of attack. The twelfth and last game of the book (Part IV) features a new plan for White, that has to my knowledge been played in only a single published game. In the notes to that game I also point out a different untested idea for White (it's better to prepare for these blows at home than to be surprised by them over the board!). The results are not in on these new ideas yet, though I believe Black should maintain the edge.

One final note for the reader: this book is organized on the same principle as my earlier opening book on the Rubinstein Nimzo-Indian. My own games are featured because I will not recommend any line that I am not willing to play. Complete games are given, since opening structures often persist all the way to the endgame. Errors in other opening books are noted; I've always tried to ignore "received wisdom" and look at positions with an unprejudiced eye.

Those who carefully study this book, especially noting the transpositional possibilities - and who keep an aggressive outlook - will be well-prepared to defeat the Smith-Morra Gambit.

007 Part I -HowBlack Should NOT Play