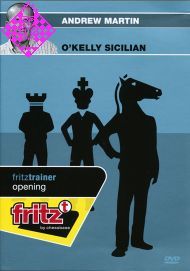 The variation 1 e4 c5 2 Nf3 a6!? does not have an especially good reputation in the theory books. Competitive players can use this unjustified assessment to their advantage because the variation is entirely playable, as International Master Andrew Martin shows on this new Chessbase DVD. With careful selection of variations, Black players can make the O'Kelly work and work well.

In fact the O'Kelly was first played by Savielly Tartakower, but it was the repeated adoption of 2...a6 by O'Kelly de Galway after World War Two that gave the variation its name.

Club players will enjoy adding the O'Kelly to their repertoire and many opponents will be unfamiliar with the unusual problems that Black is posing.

International Master Andrew Martin is 52 years old. He is a Senior FIDE Trainer and Manager of Coaching for the English Chess Federation. This is his 19th DVD for Chessbase.