The Sicilian Rossolimo for White 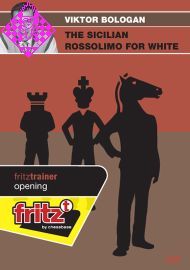 The Rossolimo Variation 3.Bb5 is considered to be one of the strongest replies to 2 ... Nc6 in the Sicilian Defence. The fact that the move has been played by practically all the top players proves its popularity and strength. But the most interesting aspect of playing 3.Bb5 is that we force sharp, attacking players who love to have the initiative to forget about the Open Sicilian and to adjust themselves to a new world, one full of positional ideas, manoeuvres and nuances. Bologan was introduced to 3.Bb5 by Vecheslav Chebanenco. The merits of the famous coach in this opening are that he worked out a complete scheme for how to play against the doubled pawns after taking on c6. Time has proved the correctness of his theory and nowadays the best answer to 3 ... g6 is considered to be 4.Bxc6; also after 3 ... e6 one of the best replies is again 4.Bxc6. We should not be afraid of conceding the bishop pair to our opponent. In exchange we get very good coordination of our pieces, usually by placing the pawns on squares of the opposite colour to that of our bishop. Video running time: 5 hours

Viktor Bologan is a pupil of the top Moldavan trainer Vecheslav Chebanenko. For many years Bologan has been the number 1 in Moldava and has represented his country in eight chess Olympiads. His greatest successes were in 2003, when he first of all won the Aeroflot Open and then the famous Dortmund Tournament, ahead of Kramnik and Anand. The Moldovan has extensive experience as a trainer and has also published his first books.