The Sicilian with 3.Bb5 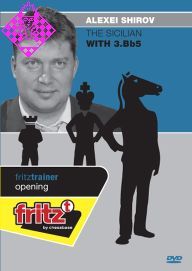 The Rossolimo Variation of the Sicilian Defence (1.e4 c5 2.Nf3 Nc6 3.Bb5) is always an excellent choice with White if you want to avoid the deeply analysed main lines of the Open Sicilian (3.d4), in which the analysis frequently goes deep into the middlegame or sometimes even into the endgame. For that reason the move 3.Bb5 has a fi rmplace in the repertoire of many grandmasters where it is welcome above all as an anti-Sveshnikov weapon. Instead of getting involved in a theoretical duel, White logically aims for strategically complex positions, e.g. by exchanging on c6 and at the cost of the bishop pair degrading Black's pawn structure (doubled pawns c6/c5). This results in positions in which positional understanding is more important than knowledge of specifi c variations - meaning that only players who are aware of the general plans and typical piece manoeuvres will be able to find their way through them.

Alexei Shirov provides you with the requisite understanding of the subtleties of these positions, by annotating extensively his most important games in this variation. During his career he has played the 3.Bb5 system with both colours and he shares with you on this DVD his valuable experience in the form of video lessons which take up a total running time of more than seven hours.