The store will not work correctly in the case when cookies are disabled.
Artikelnummer
LONIJSD
Autor
Friso NijboerA.C. van der Tak 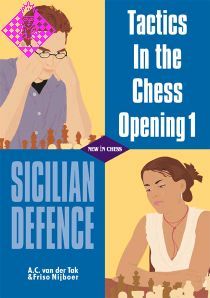 Every chess player loves to win, but nothing compares to winning with a flourish. How happy we are when the tactics work and we decide a game with a cunning trick, a devilish trap or a delightful coup de grace. The Sicilian is one of the sharpest and most popular chess openings and offers endless possibilities for players looking for fireworks. It's not for nothing that among the most loyal fans of the Sicilian we find tactical geniuses like Garry Kasparov, Bobby Fischer and Judit Polgar!

In this book you will find more than 250 carefully selected and expertly annotated Sicilian games full of unexpected turns and brilliant surprise attacks. You can study these games or just enjoy them, but either way they will end up making you a stronger player!

A.C. van der Tak is widely respected as an authority on opening theory. For the past three decades he has been a highly productive contributor to New In Chess and its predecessor Schaakbulletin .

Friso Nijboer is one of Holland's most active and most experienced grandmasters. He has played in countless national championships and was one of the topscorers of the Dutch team that won the European Championship in 2001.

The Anti-Sicilian with 3.Bb5

The Anti-Sicilian with 2.c3