The store will not work correctly in the case when cookies are disabled.
Artikelnummer
LGBOZGSAJ2/GS03
Autor
Richard BozulichFuruyama Kazunari

Get Strong at Joseki 2 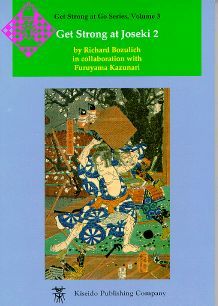 Most books on joseki list endless variations, leaving it up to the readers to fend for themselves in applying these josekis to their games. This joseki book is unique; not only does it show you the most important 5-3 point (mokuhazushi) and 5-4 point (takamoku) josekis that are likely to arise in your games, it also shows you how to apply them in actual situations, which Joseki to select, and how to continue the joseki in the middle game. It also contains many new josekis that have appeared in professional games over the last 15 years, making it the most up-to-date joseki book available.

The material is presented as a series of problems. This format is an ideal way to study joseki. Instead of memorizing variations, your attention is focused on an important joseki move or idea. Memorization then comes effortlessly, making this the perfect joseki book for all players.

Get strong at Joseki 2 is the second of a three-volume series on joseki. Volume 1 deals with the 3-4 point (komoku) josekis, and volume 3 with the 4-4 point josekis.

010 After the Joseki and Joseki Variations

Choosing the rihgt Joseki and playing after the Joseki