The store will not work correctly in the case when cookies are disabled.
Artikelnummer
LGBOZGSAT/GS06
Autor
Richard Bozulich

Get Strong at Tesuji 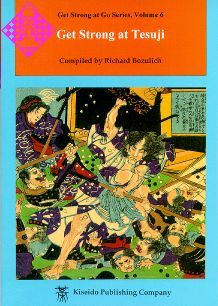 All professionals agree! The fastest way to become strong at go is to constantly study tesuji and life-and-death problems. But they also advise you not to study difficult problems. Easy problems, they say, are the most beneficial, even for dan-level players. In other words, quantity of problems studied rather than difficulty is the key to becoming a strong player. In this way, you will familiarize yourself with the key moves in all kinds of patterns, thereby developing your tesuji intuition and zeroing in on the vital points in your own games.

Now the perfect book for studying tesuji is available. Aimed at the player who has just learned the rules and played a few games, Get Strong at Tesuji contains 534 basic problems and is guaranteed to develop your tesuji intuition to the level of a dan-player. The problems are divided into three levels of difficulties: easy (25- to 10-kyu), intermediate (10- to 5-kyu), and advanced (5- to 1-kyu). There are also a few dan-level problems toward the end of the book so that you can judge your progress after tackling the other problems.

Tesujis are a skillful moves which accomplish some clear tactical objective, such as capturing a group, rescuing one of your own groups, linking up your stones, separating your opponent's stones, making good shape, etc. Skill in finding tesujis is the foundation of middle-game strength. Reading ability is also required, but if you know the kind of moves, i.e. tesujis, to look for, the sequence to your final objective often becomes instantly clear and a lot of brute-force analysis can be avoided.

There are many different kinds of tesujis - cuts, attachments, placements, hanes, descents, insertions, wedge-ins, throw-ins - and familiarity with these kinds of tesujis will give you the ability to recognize the tesuji applicable in a position at a glance.

How does a go player, aspiring to become a dan-level player attain familiarity with all these different kinds of tesujis?

The fastest way is to solve tesuji problems. The problems don't have to be difficult; in fact, easy problems are the most beneficial, especially the ones that clearly illustrate the basic idea of a tesuji and do not involve long and complicated solutions. In addition, you should solve a large number of such problems. The familiarity that you will acquire by doing this will give you the ability to instantly recognize the right tesujis in your games.

It is the aim of this book to provide the reader with hundreds of basic tesujis problems. These problems are not particularly difficult and they should be accessible even to beginning players around 25-kyu. However, it is surprising how even dan-level players miss some of these simply tesujis in their games.

Six problems are presented on a page, and the level of difficulty for each set of problems will differ. Beginning players may want to solve only the simple problems first, then go back and do the more difficult ones later. Stronger players can use this book as a tool to hone their tesuji intuition. If used in this way, it is best to spend no more than 10 seconds a move. But whatever your kyu-level and whatever way you choose to use this book, you will notice a marked imporvement in your game after you have worked through the 534 problems in this book.

Finally, I would like to thank the Nihon Ki-in for allowing me to use the problems in this book, all of which were taken from their publication entitled Tesuji Kyoka Sho.