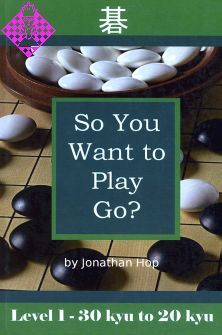 What exactly is Go?

Go is a Chinese board game invented over 4000 years ago. Go is agame of territory, a competition between two people to see who can take control of more territory than the other. Go was played in the Orient by kings and queens, paupers and monks, and has now spread internationally to both the United States and Europe. "So you want to play Go?" Level 1 is aimed at someone who knows next to nothing about Go and wants to learn the basics. Not only do you get a step by step guide on how to play the game, you will also learn about its long, fascinating history and the culture that surrounds it.

So, do you want to play Go?

165 Chapter 6: An Introduction to the End Game