The store will not work correctly in the case when cookies are disabled.
Artikelnummer
LGBOZWG
Autor
Richard BozulichPeter Shotwell

Successful Moves from the Opening to the Endgame
Eigenschaften
Sonderangebot 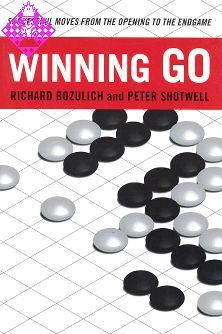 For the Go devotee, Winning Go goes beyond the basics and into the intricate world of advanced play that requires a deeper understanding of the cornplexities of this ancient game. This is the first problem book in English to cover the entire game of Go by illustrating the nuances of the opening (juseki), middle (chuban) and endgame (yose). Also included are chapters on clever moves (tesuji), life and death (shikatsu), how to win corner skirmishes (joseki), and how to accurately count. Its 203 problems and their commented answers demonstrate to the reader not only successful moves, but also the wrong moves and why they are wrong. Players willlearn about not only creating good shapes, but also how to avoid or take advantage ofbad ones, along with the right and wrang order of moves. This makes Winning Go the ideal choice for a first problem book because it enables both players and teachers to identify strengths and weaknesses in their games. From opening play to the endgame, Winning Go is an essential tool in helping serious players master the sophisticated sequence and flow of advanced Go play.

Richard Bozulich is one of the world's most prolific authors of Go books. He is the publisher of Go World magazine and wrate a highly regarded Go column for the Daily Yomiuri. He is the author of over 20 Go titles, including All About Ko, Get Strong at Tesuji, and Handicap Go and his Ishi and Kiseido Publications are widely

credited with being the prime forces for bringing Western Go standards up closer to their Eastern counterparts.

Peter Shotwell is an internationally known expert on the relationship of Go to Eastern and Western philosophy, literature, and history. He has been writing about Go for over twenty-five years and has lived in China, Tibet, and Japan while researching the origins and background of the game for the Bob High e- Library of the American Go Association. He is the author of three intraductory books from Tuttle: Go! More than a Game, Go Basics, and Beginning Go.

256 Explanations and Pronunciations of Japanese Terms Used in this Book