The store will not work correctly in the case when cookies are disabled.
Artikelnummer
SCKINPP11E
Autor
Daniel King 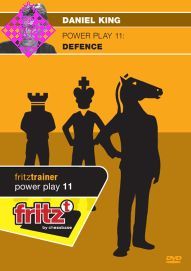 There is a seeming inevitability to many defeats – one side has the initiative, goes on the attack and from that moment it is very difficult to turn back the tide. In this 11th Power Play DVDGrandmaster Daniel King will help you to identify those key moments where there is potential danger. The secret to good defensive play is to avoid falling into a passive defensive position! Throughout the DVD, specially selected positions will enable you to test your understanding of the subject. The Power Play series is suitable for anyone looking to improve their chess, but also provides ready-made lessons and exercises for a trainer. Video running time: 5 h 25 min.

‘The PowerPlay DVD series by GM Daniel King is one of the most successful chess instruction tools today.’ – New In Chess (Shop)