The store will not work correctly in the case when cookies are disabled.
Artikelnummer
SCKINPP05E
Autor
Daniel King 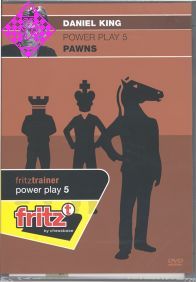 You might be a brilliant tactician or a fearsome attacker, but you won't always be able to apply these skills when you play. If a game takes on a quieter nature, it is crucial that you develop an understanding of pawn structures, pawn play and pawn weaknesses. In this fifth Power Play DVD, Daniel King discusses strong and weak pawn structures, isolated pawns and pawn islands, how to create pawn weaknesses, how to cramp a pawn struc­ture, the power of centre pawns...and much more. Remember, weak pawns can decide the game. At the end of the DVD you can test your understanding of pawn play and pawn structures by examining a series of specially selected test positions. The Power Play se­ries is suitable for anyone looking to improve their chess, but also provides ready-made lessons and exercises for a trainer. Francois Andre Danican Philidor: ,,THE PAWNS ARE THE SOUL OF CHESS." Video running time: more than 6 hours!