The store will not work correctly in the case when cookies are disabled.
Artikelnummer
SCKINPP08E
Autor
Daniel King 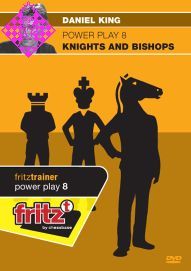 When we are starting out in chess we are told that knights and bishops both have a value of three points, but it is quite clear that in some positions a bishop is clearly superior to a knight - and vice versa. After watching this 8th Power Play DVD you’ll have

a better idea of how to play positions with knights and bishops – what to look for, what to avoid, and how to place your pawns.

Throughout the DVD, specially selected positions will enable you to test your understanding of the subject. The Power Play series is suitable for anyone looking to improve their chess, but also provides ready-made lessons and exercises for a trainer. ‘The PowerPlay DVD series by GM Daniel King is one of the most succesful chess instruction tools today.’ – New In Chess