Moving on from the Basic Principles
Eigenschaften
Vergriffen 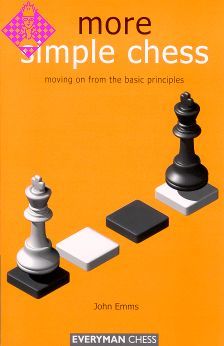 Most experts agree that to reach a high standard at chess, one must not only be able to calculate properly but also master the many positional points of the game. However, while tactical ability is clear-cut and can be improved simply by the continual practice of puzzles, learning the finer points of positional play that come so naturally to Grandmasters can seem like a frightening task for the less experienced player. In this book, Grandmaster John Emms aims to solve this problem, giving the reader a thorough grooming on all the crucial aspects of chess strategy. Moving on from the basic principles, Emms draws upon both his own experiences and those of other international players to unravel the mystery surrounding positional chess. This book will be particularly helpful for those who have previously honed their chess skills with the highly popular Simple Chess .

* An advanced course in chess strategy

* Written by an experienced chess professional

* Ideal for club and tournament players

John Emms is one of Britain's strongest Grandmasters and has represented England in various team tournaments. He now has many works to his name, including Sicilian Kan and Attacking with 1 e4 , while he is also a co-author of the very popular openings bible Nunn's Chess Openings .

When I began gathering material for my earlier book Simple Chess, I soon realised that the number of aspects of positional play that especially appealed to me was quite substantial. Unfortunately, given the space limitations, it was just impossible to include all the topics of strategy that I had originally wished to. I overcame this problem to some extent by being very selective over what made it in and what didn't, but I wasn't totally happy at having to eliminate so much material. So, when the opportunity arose to write a follow-up to Simple Chess, I was very keen to do so. Thus you are reading an introduction to (the imaginatively tided) More Simple Chess !

While reading this book, some familiarity with Simple Chess might come in handy but it's certainly not essential. Nevertheless, for those of you who (for some mysterious reason) haven't been able to secure a copy of that book, here are a few 'snippets' that might prove to be useful:

1) An outpost is a square where it is possible to establish a piece that cannot easily be attacked by opposing pawns. All pieces like outposts, but often the best piece for an outpost is a knight.

3) The 'bishop pair' (or the two bishops) often outweigh the 'bishop and knight' team, especially in the endgame.

Now a brief run through the chapters of More Simple Chess. I've begun with a look at 'problem pieces', including examples of both how to improve your own and exploit your opponent's. Subjects dealt with here include 'power plays' and 'inducement'.

In Chapter Two, the longest in this book, I've considered the extremely broad topic of exchanges which, with one or two notable exceptions, hasn't been treated especially thoroughly in previous works. I'm not quite sure why this has been the case; perhaps it's because what I would consider a very important strategical subject isn't generally regarded as overly exciting material for chess literature (as GM Peter Wells pointed out, editors are much fonder of the word 'sacrifice' than 'exchange').

The final four chapters deal with the different pieces in turn. In Chapter Three I revisit the age-old subject of the struggles between the bishop pair and the 'bishop and knight' pairing, expanding on the ideas covered in Simple Chess. Also in this chapter I take a look at those 'hard-to-see' knight retreats, a concept that I'm particularly fond of.

In Chapter Four I study the queen, the most powerful piece on the chessboard. Included in this chapter are aspects of queen play that I believe haven't received much coverage before, like 'After eating the poisoned pawn: fighting or running away?' and 'Replacing the bishop'.

In Chapter Five it's the turn of the most valuable piece: the king. Here I concentrate on examples of king power in the endgame and the perennial question of if, when and where to castle.

Chapter Six deals with rooks. One subject that particularly appeals to me is the activation of the rooks along their 'home' files (the a- and h-files) and I've paid special attention to this feature.

I've tried to reflect the changes that have occurred in modern chess. In general I've also strived to include examples where the players must make really tough decisions; I'm less interested in cases where it's obvious to the majority what should be done and what should be avoided. In this respect I believe this book is more advanced than Simple Chess. You'll find that some of the examples contain surprising and somewhat paradoxical moves, even though they may well be the correct choices.

How can one improve his or her positional understanding of chess? What worked for me was the study of ideas in countless grandmaster games, plus playing hundreds (thousands?) of competitive games myself. If that sounded quite time-consuming, then I can assure you that it was! My hope is that you'll find the examples and exercises in this book instructive, challenging and entertaining, and that they can guide you to some extent on what to look out for in games and study...

025 An exchange as part of a combination

036 Matching, similar and unlike exchanges

037 Retaining a piece for attacking purposes

039 Retaining a piece for defensive purposes

041 Offering an exchange to open lines

050 Avoiding an exchange to leave an opposing piece vulnerable

057 Considering the strength of the remaining pieces

060 Exchanging to increase control over a colour complex

084 After eating the poisoned pawn: fighting or running away?

118 Outpost on an open file