The store will not work correctly in the case when cookies are disabled.
Artikelnummer
LXWEEGMLCTH
Autor
Sunil WeeramantryAlan AbramsRobert McLellan 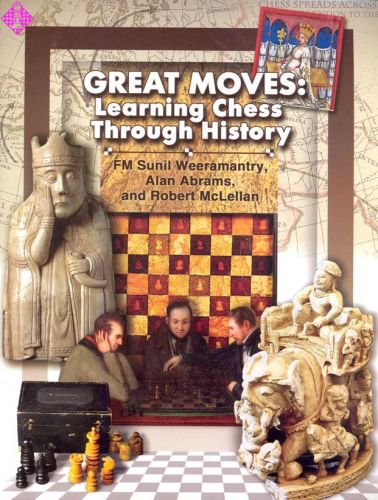 What’s the best way to learn chess? Great Moves: Learning Chess Through History blends the intricacies of chess play with the game’s rich and colorful history, putting real people at the 64 squares.

Tracing the development of chess from its origins in ancient India, the authors take the student on a far-ranging journey through the palaces of medieval and Renaissance Europe to the cafés of the Enlightenment and the dawn of the Industrial Age, with a focus on the leading personalities of the royal game and on their contributions to understanding of it. Rogues and champions, tragic as well as inspirational human stories all serve as the backdrop for illustrative games and exercises of increasing complexity highlighting their discoveries, and invite the student to grasp the potential of chess to fascinate.

Much more than a primer for beginning chess players and their teachers, Great Moves shines a light on the lives of famous players of bygone eras, helping experienced players to fill in the gaps in their chess culture.

Sunil Weeramantry is a FIDE Master, chess teacher, and Executive Director of the National Scholastic Chess Foundation. A two-time New York State Champion, Sunil is better known these days as the stepfather of GM Hikaru Nakamura, one of the world's elite grandmasters. Sunil is the author, with Ed Eusebi, of Best Lessons of a Chess Coach (Random House, 1993).

Robert McLellan was Executive Producer for the award-winning chess documentary film, Brooklyn Castle, and served two years as marketing director for the U.S. Chess Federation before joining the National Scholastic Chess Foundation, where he develops and manages teacher training programs.

003 A Note to Teachers and Parents

013 PART I. CHESS: ORIGINS AND DEVELOPMENT

358 Answers to the Chess Exercises